More appointments in Samarra: Tales from the Crypt (1972) 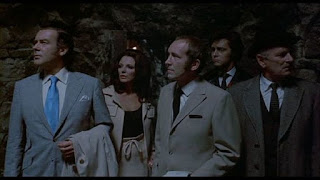 Tales from the Crypt (1972) Amicus Productions


Amicus and Freddie Francis waylay five venal, unthinking, careless fools together and let Sir Ralph Richardson goggle-eye them into reflecting on actions that have earned them eternal damnation.

"...And All Through the House"
A man unfolds the newspaper in his comfortable chair. At home on Christmas Eve, carols playing, he is relaxing before a minimalist white hearth. We are watching our side of his newspaper when we hear the meaty thwack, and the black and white newsprint begins to soak red. That's the sharpest shot in "...And All Through the House." The rest is comeuppance folderol as the Joan Collins character tries to keep juggling husband's corpse, young daughter, and the onslaught of a Santa-suit-clad escaped lunatic. 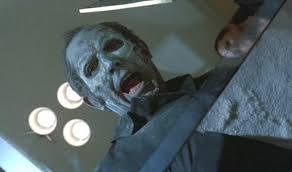 "Reflection of Death"
Dream of a death foretells death. Ian Hendry gets punished with living death for leaving wife and kids for younger, more attractive woman. Then wakes up from this nightmare to do it all - we are sure - again, and for real. E.C. Comics might have fallen foul of the 1950s witchhunt, but that was for droll graphic irreverence, not its reactionary moral line.

"Poetic Justice"
Peter Cushing at his scene-stealing again, a twittery old rag--picker (read: Jew), a widower in the crosshairs of gentrifying neighbors. They have his dogs impounded, drive away the children who adore him by spreading rumors he is a pedophile, and push him to suicide with a poison pen campaign in rhyming Valentine's Day cards. One year later, Cushing returns to pen a couplet of his own. Code of Hammurabi dramas go down easy when it's the rich getting their hearts torn out. 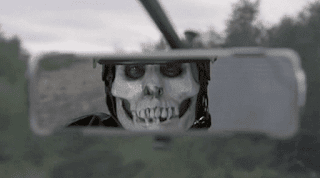 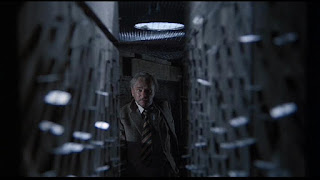 "Blind Alleys"
A fine conte cruel in which institutionalized blind men revenge themselves on their new administrator, who acts like the warden of a Stalag and keeps a pet Alsatian on a short leash. The incomparable Patrick Magee lends his sublime poignancy. Nigel Patrick is perfection as the officious, sadistic dog lover. 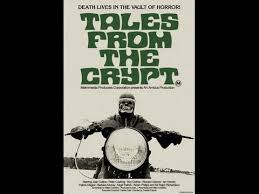 Posted by Jay Rothermel at 9:32 AM