'this vague we know not what'

....Another author of weird fiction associated with the Edwardian period is Oliver Onions (1873–1961), an erstwhile illustrator who began writing for the periodicals in the 1890s, publishing his first novel in 1900 (Kemp et al. 2002b, 301). His most well-known story, 'The Beckoning Fair One', is an example of the clear influence of Henry James on his writing, effective as it is in its own right. This, and several other of Onions' stories, is concerned with an artist struggling with the creation of their art, expressed through a supernaturally inflected narrative. Even though Onions was clearly drawn to psychic phenomena and ghost lore—explicitly referencing the Society for Psychical Research in 'Benlian' (1911) for example (Onions 1911, 177)—his oeuvre evades being subsumed within the ghost story genre proper, a fact not lost on contemporary critics:

The stories are by no means all to be dismissed as 'ghost' stories. They deal rather with various forms of supernaturalism which man does not profess, or is unable, to account for. (Athenaeum 1911, 274)

A good example of this weirder valence of his writing is the 1910 story 'Rooum', which concerns an invisible presence stalking the titular character, an itinerant construction engineer. Onions blends the traditional trope of supernatural persecution (a nineteenth-century example being Sheridan Le Fanu's 'The Familiar' (1872)) with contemporary scientific theory. In his attempts at explaining his strange affliction, Rooum speaks vaguely of 'osmosis' and 'molecules', which the narrator, although demonstrating greater scientific education, struggles to parse (Onions 1910, 1118). Typically, Onions never offers a definite explanation in terms of any specific supernatural agency (there is no ghost, as such), and never closes the door on the possibility that what is being described is a purely psychological affliction. Despite its brevity, Onions' execution of the narrative is compellingly suggestive: is Rooum's crisis over his identity, and the alleged threat to it, based on his own ethnicity (he is described by the narrator as mixed race and 'very dark' (1115))? Or is it connected with the liminal spaces of construction, and (again) the metropolitan suburbs in which the story is set (the 'eruption of red-brick houses' (1117))?

As I have discussed, this latter trope was a particular Edwardian hobby horse, but despite this, Onions' work refuses to conform neatly to retroactive periodization. Reviewing Widdershins—the collection that included

'Rooum'—the Saturday Review objects to Onions' alleged preoccupation with 'decay', leading them to place him with the 'decadent class of writers who, tired of the beautiful, seek only sensations and find them in the

study of all that is repulsive' (Saturday Review 1911, 214). The reviewer repeatedly criticizes Onions for 'taking the ugly theme of madness for so many of the stories', a preoccupation the reviewer again associates with decadence, 'the flowers of evil', and Charles Baudelaire (214–15). This reading of Widdershins as a series of investigations into degenerate psychological maladies sidelines any supernatural element to the work. For instance, 'The Beckoning Fair One' is described as 'a pitiless record of the various stages traversed by a man on his way from perfect sanity to the lunatic asylum,' though 'disguised as a ghost story' (the reviewer here echoing Max Nordau).

Indeed, this fin-de-siècle atmosphere is readily evident throughout the collection: the bohemian studio milieu of 'Hic Jacet' (1911) for instance, or the Classical Paganism of 'Io' (1911). In this latter story, which the

Saturday Review concedes to be a 'wonderfully clever piece of writing' (215), a woman is transported from her humdrum middle-class existence into a Bacchic frenzy; whether this is through actual invocation of a divine

agency or insanity is unresolved. The English Review said of the story that it was 'a masterly and beautiful conjunction of clerkly life and Dionysiac ecstasy', a description that could also apply to several of Machen's works, including 'A Fragment of Life' (English Review 1911, 755). Here again there is a through line between torrid fin-de-siècle paganism and what Carey identifies as the Pan-worship provoked by the quotidian suburbs:

the quiet external lives of their inhabitants, a stability interrupted, destabilized, and enriched by the resurgence of the romantic imagination.

Although it is certainly possible, as I have demonstrated, to identify various tropes and tendencies in Edwardian weird fiction, it is of course impossible to neatly distinguish fiction written after 1900 from that written before it. Onions in 1911, for example, was clearly being written about as an (unwelcome) outlier from the Yellow Nineties. In Chap. 4, I will discuss in detail the weird fiction of John Buchan, specifically in this context. Having acknowledged the possibility of an Edwardian weird fiction, therefore, I will once again subsume it within the more capacious ambit of the long nineteenth century. 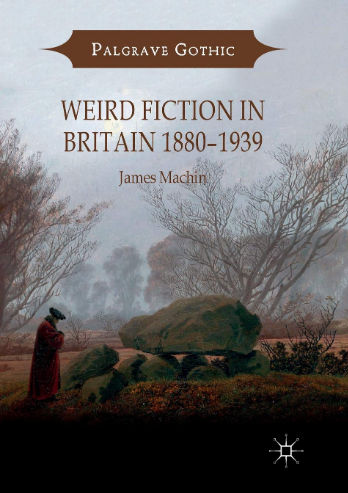 Posted by Jay Rothermel at 6:13 AM