My impression from reading "The Dunwich Horror" in high school was that it was one of Lovecraft's masterpieces, and a major work in his oeuvre.

I don't think I was reading attentively enough.

The masterpiece judgment I think comes from savoring Chapter One, which outlines the physical scene of Dunwich and environs, and goes into some of the local history, which strikes nicely the right weird notes.

Chapter Two introduces "the decadent Whateleys," deformed Albino Lavinia and her wizarding father.  [The larger of Lavinia's twin boys will have a strong facial resemblance to her father.]

The goal of son Wilbur and his grandfather is to perfect a ritual that will "clear off the earth." So much for the "idiocy of rural life."

It turns out Wilbur was essentially a human-looking head atop a camouflaging suit of clothes.

....aside from the external appearance of face and hands, the really human element in Wilbur Whateley must have been very small. When the medical examiner came, there was only a sticky whitish mass on the painted boards, and the monstrous odour had nearly disappeared. Apparently Whateley had had no skull or bony skeleton; at least, in any true or stable sense.

Chapter 7 is the fun adventure chapter, where we snoop the local telephone party-line to hear the final screams of various Dunwich farm families as they are crushed under the bulk of Wilbur's gargantuan livestock-gobbling brother.

....The whippoorwills in the glen had screamed with such unusual persistence that many could not sleep, and about 3 A.M. all the party telephones41 rang tremulously. Those who took down their receivers heard a fright-mad voice shriek out, "Help, oh, my Gawd! . . ." and some thought a crashing sound followed the breaking off of the exclamation. There was nothing more. No one dared do anything, and no one knew till morning whence the call came. Then those who had heard it called everyone on the line, and found that only the Fryes did not reply. The truth appeared an hour later, when a hastily assembled group of armed men trudged out to the Frye place at the head of the glen. It was horrible, yet hardly a surprise. There were more swaths and monstrous prints, but there was no longer any house. It had caved in like an egg-shell, and amongst the ruins nothing living or dead could be discovered. Only a stench and a tarry stickiness. The Elmer Fryes had been erased from Dunwich.

The ostensible heroes of "The Dunwich Horror," the three Miskatonic University professors Armitage, Rice, and Morgan, seem more Dennis Wheatley than cosmic horror; they pit their knowledge of Black Magic against the last Whateley sibling.

But the Whateley brothers, their mother, and wizard grandfather, are all depicted as such sad, dirty, half-educated rural outsiders that it is hard not to feel a pang of sympathy for them as their melodrama draws to a close.  The academic smart-alecks thwarted Wilbur by not letting him steal a library book. They send Wilbur's brother to destruction because he broke out of his captivity at the Whateley house due to hunger.

Yes, the Wheatley boys wanted to end all life on earth and have it for themselves. Like many cries from working people who have fallen off the bottom rung of class society, here the cry of the oppressed creature took religious form as they took aim at the heart of a heartless world. 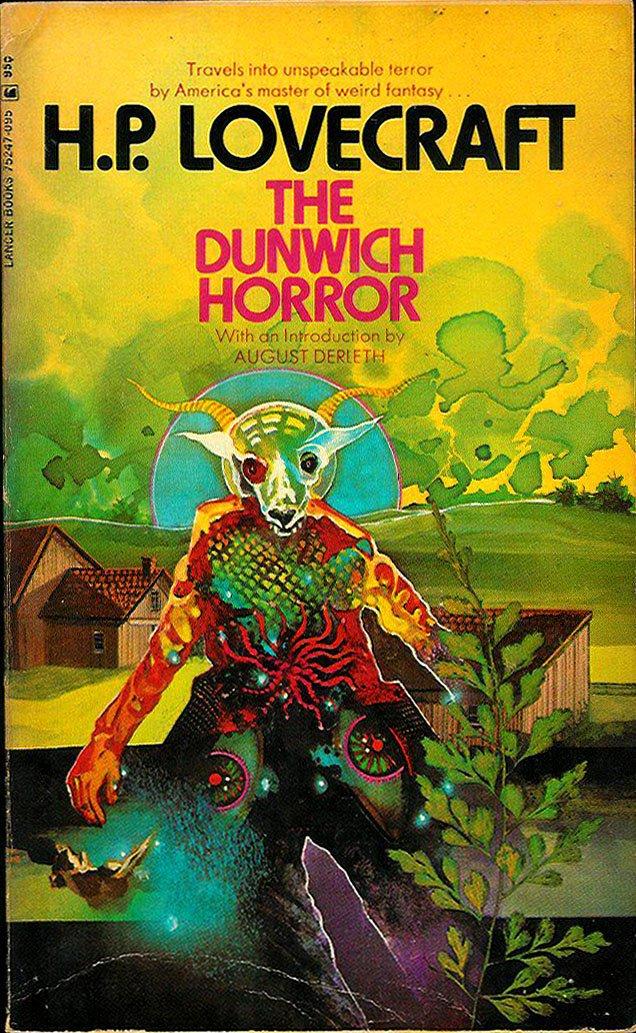 Posted by Jay Rothermel at 7:53 AM