I'm surprised some enterprising fan has not given us a "Casebook of Alonzo Typer," since prior to being dragged off to the Van Der Heyl's cellar in 1908 he seems to have had an active career.

....All his life was spent as a student; the field of his researches including many obscure and generally feared borderlands of human knowledge. His papers on vampirism, ghouls, and poltergeist phenomena were privately printed after rejection by many publishers. He resigned from the Society for Psychical Research in 1902 after a series of peculiarly bitter controversies.

At various times Mr. Typer travelled extensively, sometimes dropping out of sight for long periods. He is known to have visited obscure spots in Nepal, India, Thibet, and Indo-China, and passed most of the year 1899 on mysterious Easter Island. ...

"The Diary of Alonzo Typer" is one of the first-rate second-rate Lovecraft stories, ghostwritten for one William Lumley, whose initial draft Joshi tells us was "hopelessly illiterate." [I Am Providence]. Like "The Lurking Fear," [1922] it is an upstate New York story, far from the urban "pest zone" of NYC.  Not that everything was eugenically kosher on the Van Der Heyl estate:

.... Around the dreaded house a straggling village arose, populated by Indians and later by renegades from the surrounding country, which bore the dubious name of Chorazin. Of the singular hereditary strains which afterward appeared in the mixed Chorazin villagers, several monographs have been written by ethnologists.

Those familiar with the peripeteia of Count Magnus will get a slight horripilation at the name Chorazin.  The Van Der Heyl's must indeed have been an ambitious clan of saurian sorcerers.

The diary begins with Typer's arrival at the manse on April 17, 1908, and is the record of a countdown to May Eve.  The interior atmosphere of moldy age, deep shadows, and macabre family portraits is well-sketched. Typer quickly finds himself isolated and unable to leave the house in any direction except the toward a circle of standing stones on the nearby hill.

....Drawn toward the hill by a sinister fascination, I found the briers giving way before me, but in that direction only. There is a ruined gate, and beneath the bushes the traces of the old path no doubt exist. The briers extend part way up and all around the hill, though the summit with the standing stones bears only a curious growth of moss and stunted grass. I climbed the hill and spent several hours there, noticing a strange wind which seems always to sweep around the forbidding monoliths and which sometimes seems to whisper in an oddly articulate though darkly cryptic fashion.

These stones, both in colour and in texture, resemble nothing I have seen elsewhere. They are neither brown nor grey, but rather of a dirty yellow merging into an evil green and having a suggestion of chameleon-like variability. Their texture is queerly like that of a scaled serpent, and is inexplicably nauseous to the touch—being as cold and clammy as the skin of a toad or other reptile. Near the central menhir is a singular stone-rimmed hollow which I cannot explain, but which may possibly form the entrance to a long-choked well or tunnel. When I sought to descend the hill at points away from the house I found the briers intercepting me as before, though the path toward the house was easily retraceable....

The climax of "The Diary of Alonzo Typer" strikes the reader today as an example of the writer throwing up his hands and deciding to do whatever it takes to get the draft off his desk and into the mail before more of his time is consumed.

Typer, the Van Der Heyl family, and the Chorazin estate still seem like a promising vein of material, rather like matter Joyce Carol Oates shaped into Mysteries of Winterthurn. 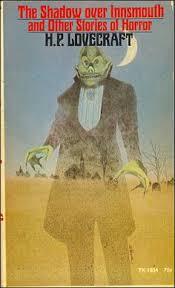