[Only words, but utterly brilliant and hilarious. Beginning of the story "Thicker than Water."]

‘YOU always were such a confounded milksop,’ said my uncle. ‘I shall never forget that time when you came down from Cambridge, pure as a lily. I gave you a ten-pound note, and told you: “Here’s a tenner, Rodney – go to the West End, find some lively company; have a good time, make a man of yourself!” And out you went, buttoned up like a blessed parson. And you were back by midnight, all flushed…. What? You’re blushing again, are you? Better watch out, Rodney. You make me think of the little train that used to run between Wittingley and Ambersham – when the driver blew the whistle, the engine lost steam, and stopped. Don’t blush; you can’t spare the blood for it. Oh, you curd, you!’

But he had no mercy. He was in one of his savage, comic humours. He went right on, in apostrophe, talking to the crystal chandelier: ‘… He comes back by midnight, does this Rodney, all of a glow. I say to myself: “Well, now, at last this bookworm has made a bit of a fool of himself. About time! Let’s have a little vicarious pleasure …” And I ask him to tell me how he has spent his evening – not, mark you, that he can have sowed many wild oats between tea-time and the Devil’s Dancing Hour. “Been dissipating, Rodney, my boy?” I ask him. And: “Oh yes, Uncle Arnold!” says this little nobody. And, as I am a living sinner, he puts down nine pounds-three-and-six, with – Lord help us! – a look of guilt, saying: “Here is the change!”’

He laughed his great, coarse laugh, and the crystals of that detestable chandelier vibrated with it, seeming to titter in sympathy. Knowing that it would be useless now to beg for mercy, I remained silent.

He continued: ‘Change, I ask you, change! – the chandelier sang: Change! Nine pounds-three-and-six out of a ten-pound note. And had he dissipated? “Oh yes, Uncle Arnold.” … On sixteen shillings and sixpence, this fellow had had his first big night in town, by all that’s marvellous! … “The cost-of-living must have dropped,” I say, “because when I was twenty-two, forty-odd years ago, and if my uncle had given me a tenner to blue in town, I’d have come home with an empty pocket and an unpaid bill from Gervasi in the Strand – yes, and had to borrow half a sovereign from the butler to pay the cabbie…. What in the world,” I ask this tame mouse, “what in the world can a gentleman do, to have an evening in town on sixteen-and-six?” And he tells me, does this Rodney: “I met my friend, Willikens, of Jesus College, and we went to a picture palace. We saw Rita Anita in Passion’s Plaything, and after the show we went to a café in Soho and had ham and scrambled eggs.”’

‘– Oh, nephew!’ he snarled, glaring at me again. ‘I decided, from that moment on, that you were a beastly little prig. I promised my dear sister-your unhappy mother – that I’d look after you. Poor girl! Your father, whom she went and married – bolts and bars wouldn’t hold her – against all our advice, was a blackguard and a scoundrel and a rogue and a vagabond. But at least he had the decency to go to the devil like a man, if not a gentleman. Whereas you – you whey-faced marigold——’

‘You can’t help anything, you!’ said he. ‘I wonder that you have the nerve to interrupt me. Why, you spaniel, for less than half of what I’ve said to you, I would have struck my own father in the face! My elder brother practically did so to my father for much less, and was kicked out of doors, and went and made his fortune in Africa … and I wish I’d gone with him…. Oh, you spiritless thing – I’d have thought better of you if you had knocked me down, just now, instead of whimpering: “Uncle, Uncle, Uncle!”’

‘– And yet,’ my uncle said, ‘there must be some kind of a spark of spirit in you, somewhere, or you wouldn’t have had the nerve to fall in love with this Mavis of yours. All the same, you should have got that kind of nonsense out of your system, the time I gave you that ten-pound note. “He who commits no follies at twenty will commit them at forty.” Whoever said that was quite right. So here you are, infatuated, at your age——’

‘– Uncle, I’m only thirty-nine!’ I said – and, to save my life, I could not have stopped my voice breaking – ‘and it isn’t infatuation. It’s true love!’

‘That would make it a thousand times worse, if it were true. Only it isn’t. It can’t be. True love, indeed – you, of all people!’

‘And why not me, as well as anyone else?’ I asked.

‘Why not you?’ he replied. ‘Because … you are you. True love’s for men. And what are you? A marigold, a carrot – aha, there he goes, blushing again like a tomato! – a weed, a vegetable; anything you like except a man. Love, young Rodney, takes blood and fire. All the fire in you has gone into your ridiculous hair; and all the blood in your body you need to blush with…. Infatuation, I say – don’t dare to interrupt – infatuation with a common dancing girl, who gets paid a couple of pounds a week for showing her fat legs to every Tom, Dick, or Harry who has sixpence to pay for a ticket!’

Even if I had not been choked with misery and rage, I dare say I should have held my tongue. My uncle was in one of his moods, and if I had told him that Mavis had slender and beautiful legs, he would have corrected himself into further offensiveness by saying: I beg your pardon, skinny legs. If I had argued that, say, Pavlova was also, by his definition, a ‘dancing girl’, and that Mavis was a serious Artiste in Ballet, he would have said, with an unpleasant leer: Oh yes, we know all about that! So was Signora Scampi, when my father set up an establishment for her in Brook Street, in 1883…. Brutal ignoramus as he was, he had a talent for turning any word to his own purpose. So I was silent, while he went on:

‘Now, if you’d been anything like a Man, I’d have been the last to object to your marrying a dancer. I nearly did myself, once – wish I had – she had legs, at least, to recommend her, which is more than my barren scrub of a Lady had … and, as for morals, if any: better. At least, La Palestina was frank, which is more than could be said for our own skinny-shanked, goosefleshed womenfolk … curse and confound them, from their droopy eyelids to their long cold feet! …

‘However, let’s not waste words. Marry your dancer, and not only will I strike you out of my will, but I cut off your allowance. Now then! Decide.’

He said, with a sneer: ‘You are infatuated with your Mavis, and she is in love with the eight hundred pounds a year I allow you. I ask you, you radish, what else could any full-blooded woman find in you to love?’

I might have said that Mavis was not the type of ballet dancer of my uncle’s turbulent youth; that she was by no means what he, and his type, would have described as ‘full-blooded’, being dark and slender, petal-pale and serious. But then he would only have snarled a laugh and cursed himself, saying that it was just as he had thought all along – the girl was anæmic, unfit to breed from, and he would see himself damned before he countenanced such a blend of milk and water.

‘Rodney, my boy,’ he said, ‘I want your word, here and now. Give up any idea you might have of marrying this girl. If not, I send a note to Coote tomorrow, and that will cost you eight hundred a year while I’m alive, and my money when I’m dead. You know me, Rodney. I’m a bull-terrier when I lay hold, and my mind’s made up…. Well?’

Then he struck the table a blow with his purple fist, and shouted: ‘I knew you would! Oh, you milksop! If you had defied me, I’d have raised your allowance to twelve hundred, and given you my blessing; and kissed your bride for you. As it is, you stick of rhubarb, your allowance is henceforward reduced to six hundred pounds a year. And let this be a lesson to you…. True love, eh? And you’d sell it for eight hundred a year!’ .... 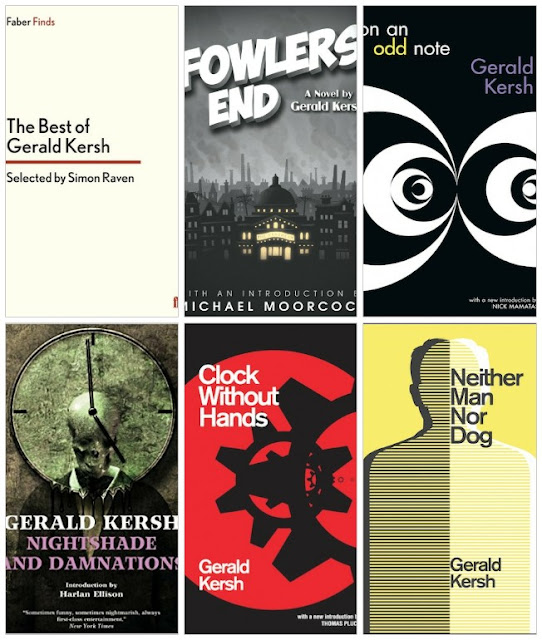 Posted by Jay Rothermel at 7:08 PM