Troupe of Fools and the Black Mass: The Grin of the Dark by Ramsey Campbell (2007)

The weird "villain" of Campbell's The Grin of the Dark (2007) begins as scholarly Mancunian Thackery Lane and ends up as silent film diabolist and trickster Tubby Thackeray.

....As the celebrant approaches the altar he lifts his robes high, exposing his naked posterior. The congregation responds with emissions of wind, simulated or actual. The priest fills the chalice as he pleases and sprinkles all those present with his blessing. He (whose sex may be obscured if he is rouged and costumed as a woman) then leads them in confession. The more outrageous the offences, the more they are greeted with laughter and applause. 'Kyrie eleleleison,' he prompts, speaking not in tongues but as a sheep. Once all have brayed Glaury-a the readings are given in no known lingo, and the greatest senselessness is hailed with Allelallelulila. 'Credo in nihil,' the priest may then improvise, unless he chooses to utter less sense. His gabblings will be designed to confound the responses of the faithful, leaving them in mirthful disarray. 'Dominus go, piss come,' he may supplicate, while in place of the Sanctus he may intone 'Thank us, Dominus Deus Azathoth.' Hard on the heels of the Pater Jester comes the Agnus Daaay-eee, during which he may pretend, if only that, to sodomise a lamb. The excesses of the Communion, however, have been stricken from the record and from the common consciousness, except for the final cry of 'Mumpsimus'. To release the congregation the priest hisses 'Eassy misssa esst,' and the worshippers respond 'Deo gratiarse' as they join him in prancing around the altar and through the aisles. Further less restrained activities may ensue before all escape from the church or cathedral.

I'm even more unsure what Lane meant to do with all this. It reads as if he was preparing it for publication or as the text of a lecture, but how could he have imagined he would get away with either? I don't like to think that his research would have affected his mind. The conclusion seems unavoidable, however, as his notes progress.

The Black Mass at its most blasphemous? A saturnalian attempt to deride the Christian ritual? Neither, yet all is connected. This is simply an account of the Feast of Fools, that celebration which was held for centuries at the darkest time of the year, when the skies are emptiest and the world feels closest to the void. No less than Saturnalia or Yuletide, this feast sought to occupy and drive back that darkness. Or may its purpose have been forgotten like the nature and identity of its instigator? What if its intention was to reach back to a state which preceded any rite?

What indeed? I'm losing my grasp of the argument, such as it is. Does the last sentence refer to the ritual or to its creator? Surely there must have been more than one of the latter, even if Lane speculates that the tradition might have simply taken shape from chaos. Perhaps his archive doesn't consist entirely of fanciful nonsense, but the notes end up full of it or worse.

Nor was the rite concluded by the emergence from the church. Often the clergy would run through the streets, pelting the populace with excrement. Their approach was frequently announced by a clangour of handbells. Comic plays might be staged in the open, lampooning local dignitaries. The players were sometimes disguised with masks, ancient even then, or with elaborate makeup. This aspect of the festivities was certainly one reason why the practices came to be condemned by the Church. Perhaps it was also felt that they too closely resembled the anarchic Decembrian revels of the pagans, when for a few days the slave was the equal of his master. Despite the issuing of condemnations, the feast survived in that form for a further two centuries, although here and there it had already separated into twin ceremonies, namely the Troupe of Fools and the Black Mass.

They were sufficiently dissimilar for the link to have been overlooked. Not only do they proceed from a common source, however, but also both seek to overthrow an established order. Where those involved in the Black Mass were persecuted, the Troupe of Fools was not merely tolerated but often encouraged by the authorities as an apparently harmless alternative to unrest. That which is most seen is most hidden, and for centuries the Troupe would enliven the shortest days with appearances, sometimes advertised but more usually unheralded except by the ringing of bells, across the countryside. We must assume there to have been several groups of players for so many performances to have been mounted in towns and villages so widespread. In time their antics proved too subversive for the subjects of their parodies, the self-styled great and good. The misrule which the Troupe left in its wake caused by-laws to be drawn up which excluded the company from many communities. Just the same, appearances of the Troupe are documented as late as the 1850s, both in Britain and on the European continent as well as the American. Perhaps some found a haven in New Orleans, where in 1830 the first masked American parade appeared on New Year's Eve, ringing cowbells and throwing flour at the populace. Certainly the Troupe has been heard of in the town of Mirocaw. Elsewhere the players would often set up their tent under cover of night and depart before daybreak. Now the music-hall may seem to have subsumed their buffoonery, but it survives in a purer form, in that purely human circus whose members are clowns to a man.

What secrets may be coded within their performances? Each of my nightly visits seems to promise revelations that never transpire, unless they occur without my recognising them. Every performance is so unlike every other that the zanies might be enacting any maggot which hatches in their heads, and yet at times I feel close to grasping a plan amid the randomness, only for it to prance like its performances out of my reach. On more than one occasion I have dreamed that the show is being staged on my solitary behalf, and indeed I have sometimes been alone in lingering until the clowns take their deformed bows. If it were not for the advertisements which were posted, however transiently, about the town, I should be tempted to conclude that the Clan of Clowns was a fancy of my own, conjured up by an excess of research. Indeed, no one but I admits to having encountered the notices, nor have any of my colleagues or my students obeyed my exhortations to cast off their inhibitions and rediscover the joys of infantilism for a night. Do the clowns mean to reproduce the genesis of language, whether in the newborn child or in the newborn universe? Such sounds as escape their gaping mouths resemble formulae more ancient than intelligence, yet I persist in my instinct that close study may reveal a structure or the impossible absence of one. More than once I have seemed to hear some distorted remnant of a chant or other ritual. Am I embalming comedy in my academicism? Should it not be swallowed whole rather than picked at with my pen? Am I not the worst example of the timidity of which I have accused my fellows and my pupils, because I alone have been accorded the opportunity to open my mind? Every one of us is a portal to the universe, and nature knows no locks. The mind hungers for development, to what end other than encompassing the whole of knowledge and experience? Let us celebrate our cerebration, not idolise the id. Mime the mind! Uncork the unconscious! Laughter is the language of the world! Embrace the errant, love lunacy, loon I say, lune ace A, loo naice eh, cul any, you clan, lack uny, lacunae, naculy, naculy, naculy...

By now I've given up. I'm simply remembering Lane's papers – at least, I think the memory is accurate, although why should it matter? I assume that by the incoherent end of the paragraph he's making notes for some performance of his own; the gibberish reminds me of the intertitles of his films. There are few complete sentences after that. Sometimes the painstaking script degenerates into scribbles too introverted to be legible or symbols that might be some highly personal version of shorthand or just symptoms of an intermittent inability to write, if they don't betoken a rush of ideas too overwhelming for the pen to keep up. Occasionally a sentence coheres out of the babble, but with so little in the way of context that these interludes fail to convey much. One I copied with the pencil I was allowed to use seems either to foresee or to propose opening some portal to infinity. What this infinity might contain or consist of seems important but remains unclear. Then Lane sets about mutating and otherwise improvising on the word: port all, paw tall, gait weigh, pile on, en trance, can treen, can't reen, can't reen... Here as elsewhere there's a sense, if that's the word, that once he creates an utterly meaningless fragment of language he becomes carried away by its echoes in his head. I imagine Tubby prancing to the rhythm, grinning wider and more big-eyed at every step. I don't want to see that, nor to hear the words resounding in my skull. I'm grateful to be distracted by the librarian who has brought me a spool of microfilm. 'I'll try not to shut you down this time,' I tell her.

'I beg your pardon?'

'I'll do my best not to blow any of your fuses.' When she continues to give me a delicate frown I add 'Like I did last time I was here.'

She's unquestionably the same girl, even if her black curls are now blonde, as if she's turning into a negative image. There's no point in offering my name. 'My mistake,' I say. 'Don't let it worry you.'

It appears to as she loads the spool into the reader. I turn to a blank page of my notebook, glimpsing Lane's notions on the way: 'The masque becomes the world' and 'Who shall say the guise is not the face?' and 'All shall be spoken behind a mask'. It seems impossible that they'll find any place in my book. At least today's research is more straightforward. Surely the newspaper I mistook for the Preston Chronicle was the Preston Gazette.

That's the publication on the microfilm. As I wind the issues for January 1913 through the viewer, every photograph of people in Edwardian dress reminds me of extras in a Tubby Thackeray film. Am I too immersed in my research? There were surely more significant events back then, not least the imminence of a world war. Then a pair of headlines makes me grip the rudimentary controls as if I've won a video game.

PERFORMANCE MUST BE KEPT WITHIN PROPER BOUNDS.

So this was the newspaper I bought from the Comical Companions stall. The idea that I could have misread it, especially since even the typeface differs from my memory of it, blurs my vision. Or is the display losing definition? I twist the focusing screw, which only aggravates my inability to read the headlines. I, FORMER, ACE... I'm barely able to decipher these letters before they succumb to the indistinctness that's blackening the page. I turn the screw the other way, and the image sharpens. It doesn't contain a single recognisable word. I feel as if nonsense is spreading through the text – as if the silent clamour of Lane's misshapen language in my skull is infecting a historical record – and then I identify the blackness that's overwhelming the page. The microfilm is charring like a cinema film that has become stuck in a projector. 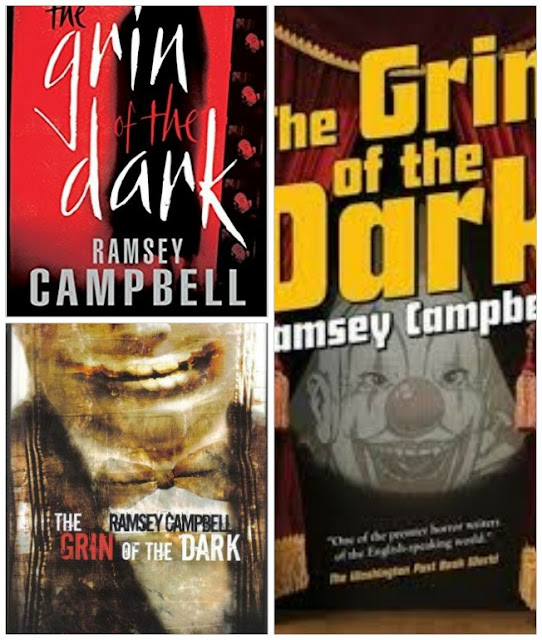 Posted by Jay Rothermel at 5:12 AM