The stench of something atrociously wrong: A few reading notes on the collection The Red Brain: Great Tales of the Cthulhu Mythos

I'm not sure what motivated the publishers to produce such an uneven "great tales" collection. Most of the early stories are surely sub-canonical.The more recent stories are, to be kind, earnest attempts to aestheticize self-indulgence.

The chief pleasure of the book was reading for the first time Ramey Campbell's "The Pattern" and Brian McNaughton's "Meryphillia." The other stories only distract, and are best skipped tout court.

My reading notes are below.

FALCO OSSIFRACUS: BY MR. GOODGUILE Edith Miniter (1921)
Anyone who thought putting this item between covers was useful, or whimsical, should rethink their career.

THE RED BRAIN
Donald Wandrei (1927)
D. Wandrei had some spectacular ideas for stories and novels. "The Red Brain" has conceptually the entropic sublimity found in Stapledon and Arthur C. Clarke. But Wandrei does not have the artistic chops to match the scope of his vision. His tale of a colloquium of alien superbrains discussing ways to defeat a universe-smothering dust cloud sounds like a Justice League committee meeting.

THE BEAST OF AVEROIGNE
Clark Ashton Smith (1933)
This oft-anthologized tale about a comet-borne beastie sucking spinal marrow in Medieval France excels when the writer gets out of his own way. But imitating a bygone style of writing is more trap than harness, and the rhetorical anachronisms and infelicities loudly clank.

THE PATTERN
Ramsey Campbell (1976)
No false notes. No false emotions. No laziness. No reliance on jargon. It takes reading Wandrei, Smith, and Thompson to really appreciate the incredible strengths Campbell brings to the genre. Most horror writing is gormless self-indulgence, particularly among pseudo-Lovecraft epigones.  Campbell's artistry and idiom are here under complete control.

THE SECT OF THE IDIOT
Thomas Ligotti (1988)
Beneath the squamous style, Ligotti gives us content impossible to further parody: "Let me write, while I still am able, that the transformation has not limited itself. I now find it difficult to continue this manuscript with either hand. These twitching tentacles are not suited for writing in a human manner, and I am losing the will to push my pen across this page."

MERYPHILLIA
Brian McNaughton (1990)
An exceptionally smart and well-organized fantasy of love, loss, and self-acceptance among ghouls in a Ruritanian dream land. On a level of attainment with Duane Pesice's story "Ghoul Picnic" in its intensity.

THE PEDDLER’S TALE; OR, ISOBEL’S REVENGE
Caitlín R. Kiernan (2013)
More ghoulishness in the lala land of phantasy. The story strikes some sharp emotional notes. While the tale-within-a-tale method makes the narrative more abstracted than it could be, the payoff at the end more than justifies the artistic choice.

INTEGRITY
Jonathan Thomas (2015)
To do well that which should not be done at all: trying to braid together hardboiled Continental Opery with ghoulish demonic corporate horror. A boring and protra ted aesthetic abortion

PICKMAN’S LAZARUS
W. H. Pugmire
I have never read Pugmire before. I think the editor here did him a disservice by including a weak story in a caninical anthology. "Pickman's Lazarus" is fan fiction, and the predictable ending flops miserably. Anyone wanting a tale of true horror about artists and their paintings should read "Cain" by Amelia B. Edwards.

THE CRIMSON FOG
Mark Samuels
An ambitious story, but in the end it cannot break free of self-imposed limitations. A retread of Conrad's Heart of Darkness. Its soldier narrator once - God help us - took a creative writing class and is conversant with Lovecraft and Machen. Punctuated with classy strokes like this:  "I drew my sidearm from its holster, pressed the business end of the pistol to his temple, and squeezed the trigger before he could finish the sentence. The sharp recoil as it discharged reminded me of the last time I’d jerked off."

MISANTHROPE
Ray Garton
I'm surprised Garton wouls be up for inclusion in a collection edited by a man who referred to him as sub-Laymon in Unutterable Horror. But no matter. There is the usual job for the Gartonesque protagonist: helming the cash register at an adult bookshop built over a Yog-Sothothic portal. Adding social relevance, Garton gives us some Alex Jones brand politics:
"“My father was a very religious man who maintained two religious identities—his Christian identity for appearances, and his real religious identity which he shared only with his fellow worshippers. They worship an ancient Ammonite god called Moloch. But one name is never enough for a god, so he has many. You’d be surprised how many people at that level of business and power—entire families going back many generations—are members of this cult. Not just in this country, but in Europe, the Middle East, all over the world. But in absolute secrecy, of course." 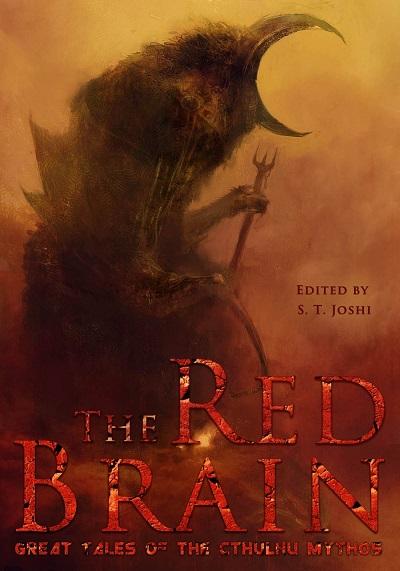 Posted by Jay Rothermel at 5:20 PM