The matter is of little consequence, the manner is everything: The Three Imposters by Arthur Machen

The Three Impostors by Arthur Machen (1895)

Arthur Machen's 1895 novel The Three Imposters is a stunning accomplishment for a thirty-two year old writer. It is subtitled "The Transformations," and the serpentine and effortlessly folded plot certainly demands transformations in the reader's attention.

Characters encountered by Mr. Dyson and Mr. Phillipps move through a variety to disguises and masks to conceal their goal: reclaiming a valuable Roman coin. They tell our protagonists strange and often terrifying stories, one of the richest subterfuges in any work of modern fiction I can recall.

The Three Imposters is a hymn to the changing landscape of London and it's suburbs.  Dyson and Phillipps walk the city and outlying districts obsessively, changing course like dowsers.

It is also a celebration of coincidence. Indeed, the first and last chapters hang upon Machen's commanding use of absurd synchronicity.

These self-contained bijou novels are false confections, but they are also great works of fiction. None are supernatural, but all contribute to building up an uncanny atmosphere.

The Three Imposters is not a detective story. There is no detecting beyond leveraging coincidence. It all succeeds on Machen's sublime skill as a writer:

....Dyson had persuaded the ingenious Mr. Phillipps to accompany him on one of those aimless walks to which he was himself so addicted. Starting from the very heart of London, they had made their way westward through the stony avenues, and were now just emerging from the red lines of an extreme suburb, and presently the half-finished road ended, a quiet lane began, and they were beneath the shade of elm-trees. The yellow autumn sunlight that had lit up the bare distance of the suburban street now filtered down through the boughs of the trees and shone on the glowing carpet of fallen leaves, and the pools of rain glittered and shot back the gleam of light. Over all the broad pastures there was peace and the happy rest of autumn before the great winds begin, and afar off, London lay all vague and immense amidst the veiling mist; here and there a distant window catching the sun and kindling with fire, and a spire gleaming high, and below the streets in shadow, and the turmoil of life. Dyson and Phillipps walked on in silence beneath the high hedges, till at a turn of the lane they saw a mouldering and ancient gate standing open, and the prospect of a house at the end of a moss-grown carriage drive.

“There is a survival for you,” said Dyson; “it has come to its last days, I imagine. Look how the laurels have grown gaunt, and weedy, and black, and bare, beneath; look at the house, covered with yellow wash and patched with green damp. Why, the very notice-board which informs all and singular that the place is to be let has cracked and half fallen.”

“Suppose we go in and see it,” said Phillipps. “I don’t think there is anybody about.”

They turned up the drive, and walked slowly, towards this remnant of old days. It was a large straggling house, with curved wings at either end, and behind a series of irregular roofs and projections, showing that the place had been added to at divers dates; the two wings were roofed in cupola fashion, and at one side, as they came nearer, they could see a stable-yard, and a clock turret with a bell, and the dark masses of gloomy cedars. Amidst all the lineaments of dissolution, there was but one note of contrast: the sun was setting beyond the elm-trees, and all the west and the south were in flames, and on the upper windows of the house the glow shone reflected, and it seemed as if blood and fire were mingled. Before the yellow front of the mansion, stained, as Dyson had remarked, with gangrenous patches, green and blackening, stretched what once had been, no doubt, a well-kept lawn, but it was now rough and ragged, and nettles and great docks, and all manner of coarse weeds, struggled in the places of the flower-beds. The urns had fallen from their pillars beside the walk, and lay broken in shards upon the ground, and everywhere from grass-plot and path a fungoid growth had sprung up and multiplied, and lay dank and slimy like a festering sore upon the earth. In the middle of the rank grass of the lawn was a desolate fountain; the rim of the basin was crumbling and pulverized with decay, and within, the water stood stagnant, with green scum for the lilies that had once bloomed there; and rust had eaten into the bronze flesh of the Triton that stood in the middle, and the conch-shell he held was broken.

“Here,” said Dyson, “one might moralize over decay and death. Here all the stage is decked out with the symbols of dissolution; the cedarn gloom and twilight hangs heavy around us, and everywhere within the pale dankness has found a harbor, and the very air is changed and brought to accord with the scene. To me, I confess, this deserted house is as moral as a graveyard, and I find something sublime in that lonely Triton, deserted in the midst of his water-pool. He is the last of the gods; they have left him and he remembers the sound of water falling on water, and the days that were sweet.”

“I like your reflections extremely,” said Phillipps, “but I may mention that the door of the house is open.”.

The door was just ajar, and they passed into the mouldy hall, and looked in at a room on one side. It was a large room, going far back, and the rich old red flock paper was peeling from the walls in long strips, and blackened with vague patches of rising damp; the ancient clay, the dank reeking earth rising up again, and subduing all the work of men’s hands after the conquest of many years. And the floor was thick with the dust of decay, and the painted ceiling fading from all gay colors and light fancies of cupids in a career, and disfigured with sores of dampness, seemed transmuted into other work. No longer the amorini chased one another pleasantly, with limbs that sought not to advance, and hands that merely simulated the act of grasping at the wreathed flowers, but it appeared some savage burlesque of the old careless world and of its cherished conventions, and the dance of the loves had become a dance of Death; black pustules and festering sores swelled and clustered on fair limbs, and smiling faces showed corruption, and the fairy blood had boiled with the germs of foul disease; it was a parable of the leaven working, and worms devouring for a banquet the heart of the rose.

Strangely, under the painted ceiling, against the decaying walls, two old chairs still stood alone, the sole furniture of the empty place. High-backed, with curving arms and twisted legs, covered with faded gold leaf, and upholstered in tattered damask, they too were a part of the symbolism, and struck Dyson with surprise. “What have we here?” he said. “Who has sat in these chairs? Who, clad in peach-bloom satin, with lace ruffles and diamond buckles, all golden, a conté fleurettes to his companion? Phillipps, we are in another age. I wish I had some snuff to offer you, but failing that, I beg to offer you a seat, and we will sit and smoke tobacco. A horrid practice, but I am no pedant.”

They sat down on the queer old chairs, and looked out of the dim and grimy panes to the ruined lawn, and the fallen urns, and the deserted Triton.

“It’s a foolish fancy,” he said at last, “but I keep thinking I hear a noise like some one groaning. Listen; no, I can’t hear it now. There it is again! Did you notice it, Phillipps?

“No, I can’t say I heard anything. But I believe that old places like this are like shells from the shore, ever echoing with noises. The old beams, mouldering piecemeal, yield a little and groan, and such a house as this I can fancy all resonant at night with voices, the voices of matter so slowly and so surely transformed into other shapes; the voice of the worm that gnaws at last the very heart of the oak; the voice of stone grinding on stone, and the voice of the conquest of time.”

They sat still in the old armchairs and grew graver in the musty ancient air — the air of a hundred years ago.

“I don’t like the place,” said Phillipps, after a long pause. “To me it seems, as if there were a sickly, unwholesome smell about it, a smell of something burning.”

“You are right; there is an evil odor here. I wonder what it is! Hark! Did you hear that?”

A hollow sound, a noise of infinite sadness and infinite pain broke in upon the silence; and the two men looked fearfully at one another, horror and the sense of unknown things glimmering in their eyes.

“Come,” said Dyson, “we must see into this,” and they went into the hall and listened in the silence.... 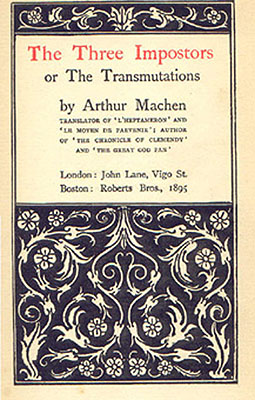 Posted by Jay Rothermel at 4:29 AM