Menacing landscape: The Inhabitant of the Lake by Ramsey Campbell

"The Inhabitant of the Lake" by Ramsey Campbell

Last Friday I made a special journey down to Bold Street, and found out quite a bit about my lakeside street. The agent wasn't particularly pleased to see me, and seemed surprised when I told him I hadn't come for my money back. He still was wary of saying much, though—went on a bit about the houses being built 'on the orders of a private group.' It didn't seem as though I'd get much out of him, and then I happened to mention that I was having dreams like the earlier tenants. Before he could think, he blurted out: 'That's going to make some people a bit happier, then.'

'What do you mean by that?' I asked, sensing a mystery.

Well, he hedged a bit, and finally explained: 'It's to do with the "haunting" of your lake. There's a story among the country people—and it extends to them in the suburbs around Mercy Hill, which is nearest your place—that something lives in the lake, and "sends out nightmares" to lure people to it. Even though the nightmares are terrifying, they're said to have a hypnotic effect. Since the place became untenanted, people—children particularly—in the Mercy Hill area have been dreaming, and one or two have been admitted to the Hill hospital. No wonder they have nightmares around there—it used to be the site of a gallows, you know, and the hospital was a prison; only some joker called it "Mercy Hill," and the name stuck. They say the dreams are the work of what's in the lake—it's hungry, and casting its net further out. Of course it's all superstition—God knows what they think it is. Anyway, if you're dreaming, they'd say it won't need to trouble them any more.'

'Well, that's one thing cleared up,' I said, trying to follow up my advantage. 'Now, why were the houses really built? What was this "private group" you're so secretive about?'

'It'll sound crazy to you, no doubt,' he apologised. 'The houses were built around 1790, and renovated or added to several times. They were put up on the instructions of this group of about six or seven people. These people all disappeared around 1860 or 1870, apparently leaving for another town or something—anyway, nobody around here heard of them again. In 1880 or so, since there'd been no word from them, the houses were let again. For many reasons, people never stayed long—you know, the distance from town; and the scenery too, even if that was what got you there. I've heard from earlier workers here that the place even seemed to affect some people's minds. I was only here when the last tenant came in. You heard about the family that was here last, but this was something I didn't tell you. Now look—you said when you first came that you were after ghosts. You sure you want to hear about this?'

'Of course I do—this is what I asked for,' I assured him. How did I know it mightn't inspire a new painting? (Which reminds me, I'm working on a painting from my dream; to be called The Thing In The Lake.)

'Really, it wasn't too much,' he warned me. 'He came in here at nine o'clock—that's when we open, and he told me he'd been waiting outside in the car half the night. Wouldn't tell me why he was pulling out—just threw the keys on the counter and told me to get the house sold again. While I was fixing some things up, though, he was muttering a lot. I couldn't catch it all, but what I did get was pretty peculiar. Lot of stuff about "the spines" and "you lose your will and become part of it"—and he went on a lot about "the city among the weeds." Somebody "had to keep the boxes in the daytime," because of "the green decay." He kept mentioning someone called—Glarky, or something like that—and also he said something about Thomas Lee I didn't catch.'

That name Thomas Lee sounded a bit familiar to me, and I said so. I still don't know where I got it from, though.

'Lee? Why, of course,' he immediately said. 'He was the leader of that group of people who had the houses built—the man who did all the negotiating... And that's really about all the facts I can give you.'

'Facts, yes,' I agreed. 'But what else can you tell me? I suppose the people round here must have their own stories about the place?'

'I could tell you to go and find out for yourself,' he said—I suppose he was entitled to get a bit tired of me, seeing I wasn't buying anything. However, he went on: 'Still, it's lucky for you Friday is such a slack day... Well, they say that the lake was caused by the fall of a meteor. Centuries ago the meteor was wandering through space, and on it there was a city. The beings of the city all died with the passage through space, but something in that city still lived—something that guided the meteor to some sort of landing from its home deep under the surface. God knows what the city would've had to be built of to withstand the descent, if it were true!

'Well, the meteor crater filled with water over the centuries. Some people, they say, had ways of knowing there was something alive in the lake, but they didn't know where it had fallen. One of these was Lee, but he used things nobody else dared to touch to find its whereabouts. He brought these other people down to the lake when he got to know what was in there. They all came from Goatswood—and you know what the superstitious say comes out of the hill behind that town for them to worship... As far as I can make out, Lee and his friends are supposed to have met with more than they expected at the lake. They became servants of what they awoke, and, people say, they're there yet.' 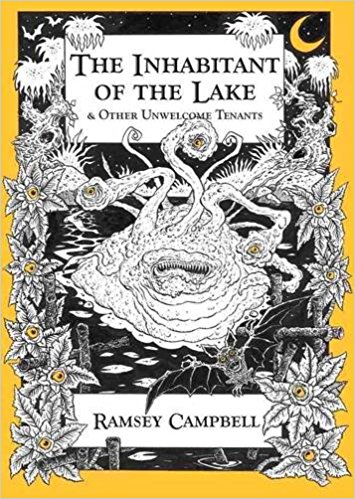 Posted by Jay Rothermel at 4:34 AM