This is a charming book of interconnected adventures. They are not clued and puzzly classical who-done-its. They are stories of a bacherlor Scotland Yard man and his dog on a six month vacation in 1920s Devonshire.
Most are stand-alone adventures with real melodramatic charm. But "The Two Spinsters" has done real moments of uncanny menace, and I found it very moving. 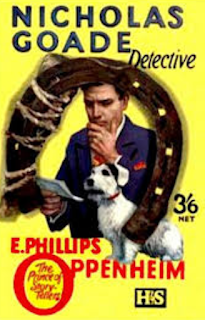 JUST as the first gleam of dawn was forcing a finger of light through the sullen bank of clouds, a distraught and dishevelled-looking man, followed by a small, fat, white dog, stumbled into the village of Nidd, gasped with relief at the sight of the brass plate upon a door, and pulled the bell for all he was worth. Presently a window was opened and a man's shaggy head thrust out.
"Steady there!" he expostulated. "What's wrong?"
Goade looked up.
"I've spent a part of the night in a farmhouse a few miles from here," he explained. "There's a dead man there and two mad women, and my car's broken down."
"A dead man?" the doctor repeated.
"I've seen him. My car's broken down in the road, or I should have been here before."
"I'll be with you in five minutes," the doctor promised.
He was as good as his word. Presently they were seated in his car on their way back to the farm. He listened to Goade's story and nodded sympathetically.
"If the way I've been piecing it together turns out to be right," he remarked, "you've had a narrow escape."
It was light now and showed signs of clearing, and in a short time they drew up in front of the farmhouse. There was no answer to their knock. The doctor turned the handle of the door and opened it. They entered the kitchen. The fire was out, but, each in her high-backed chair, Mathilda and Annabelle were seated, facing each other, speechless, yet with wide-open eyes. They both turned their heads as the two men entered. Annabelle nodded slowly with satisfaction.
"It is the doctor," she said. "Doctor, I am glad that you have come. You know, of course, that William is back. He came for me. He is lying upstairs, but I cannot wake him. I sit with him and I hold his hand and I speak to him, but he says nothing. He sleeps so soundly. Will you wake him for me, please. I will show you where he lies."
She led the way from the room, and the doctor followed her. Mathilda listened to their footsteps. Then she turned to Goade with that strange smile once more upon her lips.
"Annabelle and I do not speak," she explained. "We have not spoken for so many years that I forget how long it is. I should like some one to tell her, though, that the man who lies upstairs is not William. I should like some one to tell her that you are William, and that you have come back for me. Sit down, William. Presently, when the doctor has gone, I will build the fire and make you some tea."
Goade sat down, and again he felt his hands trembling. The woman looked at him kindly.
"You have been gone a long time," she continued. "I should have known you anywhere, though. It is strange that Annabelle does not recognise you. Sometimes I think we have lived together so long here that she may have lost her memory. I am glad you fetched the doctor, William. Annabelle will know now her mistake."
There was the sound of footsteps descending the stairs. The doctor entered. He took Goade by the arm and led him on one side.
"You were quite right," he said gravely. "The man upstairs is a poor travelling tinker who has been missing for over a week. I should think that he has been dead at least four days. One of us must stay here whilst the other goes to the police station."
Goade caught feverishly at his hat. "I will go to the police station," he declared.
Posted by Jay Rothermel at 8:53 AM