On Reggie Oliver: The Dreams of Cardinal Vittorini & Other Strange Stories

The amplitude of Reggie Oliver's short stories and novellas gives them the heft of a novel. Their style is a seemingly effortless depiction of events, characters, and time passing. The characters are well-drawn, and their decisions, and the author's choices, keep turning the tales toward a dramatic complication that enriches and strengthens.  Oliver's style, his priorities, and his wit complement large ambitions in the stories.


I had the pleasure in October of reading six Reggie Oliver story collections.  His achievement is substantial. I normally avoid reading so many stories in a limited space of time by the same writer; with Oliver, though, there was no sense of staleness and repetition.  Each story, in its own way, felt unique and entire unto itself.


In his 2018 collection 21st Century Horror: Weird Fiction at the Turn of the Millennium, S.T. Joshi observes:


….Reggie Oliver's overall corpus of ghostly fiction is impressive and compelling. Particularly impressive is the sheer intelligence of Oliver's writing: his easy command of the varied disciplines of literature, theatre, history, religion, philosophy, music, and others; his deft use of Latin, French, and other languages; his sharp eye for the distinctive traits and foibles of his characters; and his pliant, smooth-flowing prose, with a minimum of stylistic or grammatical blunders and unmistakably British in ambiance….


Matt Cowan of Horror Delve has expressed similar enthusiasm: "Reggie Oliver has now joined the ranks of names I look for in the table of contents of the anthologies I buy."


I can only agree.


Below are a few notes on each story, or an excerpt I thought particularly fine.

Beside the Shrill Sea
….The tide was in and the shore almost deserted. A few hundred yards away from us a solitary male figure was hurling stones violently into the sea. Some trick of the light, or perhaps our troubled imaginations, made the figure, dressed all in black, seem unnaturally tall and thin. As we came closer we could hear that he was singing to himself some kind of unidentifiable rock tune in a high sexless whine. As the song reached a crescendo he threw a stone high into the air. We watched as the stone described its arc then dropped with barely a splash into the dark sea. For a moment the whining stopped; then it began again.


Feng Shui
A spectacular tale of antique menace, sorcery, and esoteric manuscripts in a muniment cupboard.
'….. It was the only piece of furniture left behind by the previous occupants, and they left it here because it was there when they came. Before that the house was owned by an old bachelor called Mr Abney who lived here with a housekeeper. This is going back before the war. There are still people around who remember him. Not fondly, I'm afraid. No particular reason, just that he was eccentric. "Queer" was the word used, though, of course, in the old traditional sense of odd. Not, you know . . .'


In Arcadia
…. Turning the picture over he found a label on which in faint sepia ink had been written the words: Gaspr Poussin pinxit Roma Ao MDCLXXV. The inscription puzzled Jason. He knew Poussin to have been a famous painter, but he had a vague recollection that his Christian name was Nicolas, not the mysterious 'Gaspr'. But it was old. The Roman numerals gave him the date 1675.

Evil Eye
A disturbing story of electronic security bedroom voyeurism.
….Suddenly he turned his head to stare directly at the camera. Alex and I both jumped. He might have been in the room, the look was so immediate and intense. It seemed to leap at us across the barriers of technology and time. His extraordinary pale blue eyes were filled with concentrated loathing. Like everything about him, there was something purposeful in his look. It was not rage, or hatred merely for the sake of rage, it was the performance of some indefinable act.
'My God, he's seen us!' said Alex involuntarily.


Miss Marchant's Cause
A Victorian mental health crusader's degeneration.
…. I asked her what she had meant when she had asked me if I had fallen under her spell too. She said that she had once researched the Marchant case for a book she was writing. She said: 'I found that if you get too close to her you can get burnt.' I tried to ask her to explain further, but she deliberately ignored me and busied herself with serving coffee to others.

Tiger in the Snow
The world of trendy artists and their galleries suffer when they grapple with human infamy.
….'I don't know, but it's funny. It's like the place is always full but I haven't seen them come in. And there aren't many signing the visitors book. And they dress funny.'

Garden Gods
…. Adrian Clavering was found dead in his Temple of Pan one bitter January morning in 1971. There were mysterious circumstances surrounding his death which the police never cleared up. The property was inherited by a great nephew who, being a normal philistine Clavering, sold the Georgian furniture with the modern paintings, and neglected the garden. When he left his wife, she was allowed to live at Wyvern rent-free as part of the divorce settlement, and there she drank herself into an early grave. By an odd coincidence she too was found dead one morning in the Temple of Pan. It was on her death that Wyvern was sold to Jules and Tonia Paige.

The Black Cathedral
The hazards of combining the occult with video game design.
…. The statuette of the crouching figure was very like something I had seen before. One of the images Jasper had sent me when we were working on the Black Cathedral was an old engraving of just such a hooded creature. I remember the engraving had a name scrawled under it in antique script: Asmodeus. The statuette was an exact realisation of that engraving. I knew that because I had turned the engraving into a 3D computer graphic.

The Boy in Green Velvet
A boy loses his father, then meets his Uncle Alfred for the first time. From the uncle he receives a toy theater with some very strange properties.


The Golden Basilica
A poignant tragedy of fathers and sons, pitched to a nearly unbearable level of emotional intensity.
…. I entered the bedroom, drawn by the horrible force. I remember nothing of the room, only the mahogany bed on which was a cream-coloured candlewick bedspread. Something vast and misshapen was writhing and thrashing under it, or it may have been two things because a struggle seemed to be going on beneath the covering.

Death Mask
….As I got to know Gordon and Freda some things about their life puzzled me. They behaved not as I had seen other married couples behave, but more like friends. They chattered away to each other and laughed and teased, but they very rarely touched. I was surprised to find that Freda and Gordon had separate bedrooms. There was something odd too about Halton House. It seemed only partly furnished, and what furniture there was, with the exception of a few small pieces, was battered and undistinguished. I noticed that several of the rooms in the house were empty. I later discovered that Freda and Gordon were not the owners of Halton House, but merely its tenants

The Seventeenth Sister
An aging priest tells a colleague about an encounter early in his career with Evil.
….. Evil, like beauty, is a thing of itself, without cause or justification. It is an entity, independent of those it acts on and through. When you see it, you know it.' Berrigan was leaning forward and I saw that there was a tremor in the hand that held his whiskey. 'Hannah Arendt was wrong when she talked about the banality of evil. Sin is banal. Human weakness is banal. But evil lies beyond human weakness. It preys on human weakness, and it is not banal.'

The Copper Wig
Extraordinary occurrences in a Victorian theater troupe.
…. One oddity about him that I noticed was that he would never let the wig out of his sight. Once the performance was over he would place the wig on its block, into the cardboard box and take it back to his lodgings. Sometimes he would wear it during the day. One morning I saw him from the back walking down Acker Street in Manchester. For a moment I could have sworn it was Marden. When I asked him who had made this wonderful wig for him he gave an evasive reply, and on looking for the label on the top of the cardboard box I noticed that it had been carefully removed.

The Dreams of Cardinal Vittorini
Said Cardinal suffers a supernatural punishment after overseeing the torture and execution of an esoteric Christian sect.
…. Signor Andrei was discussing the works of Porphyry, a favourite subject of his, when he happened to mention that there was a group of men and women in Rome—he called them a sect—who were devoted to the teachings of Porphyry and Plotinus. They called themselves Ignotists, and taking as their premise the idea of Plotinus that God was unknowable, they worshipped Ignorance as a god and indulged in all kinds of curious practices. At this His Eminence stiffened. It was normal at these banquets for the Cardinal to be at his most carefree, and to allow conversation to wander where it would without consideration for the strictest propriety; but Signor Andrei had entered a sphere in which His Eminence's most sacred obligations were engaged. Andrei himself immediately became aware of this and fell silent. 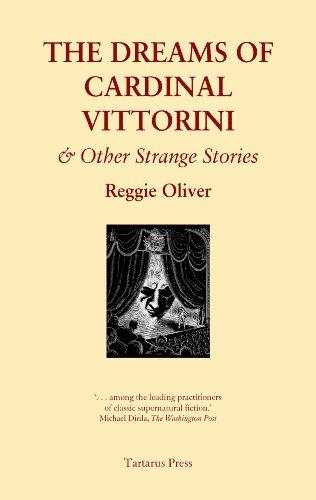 Posted by Jay Rothermel at 8:08 AM