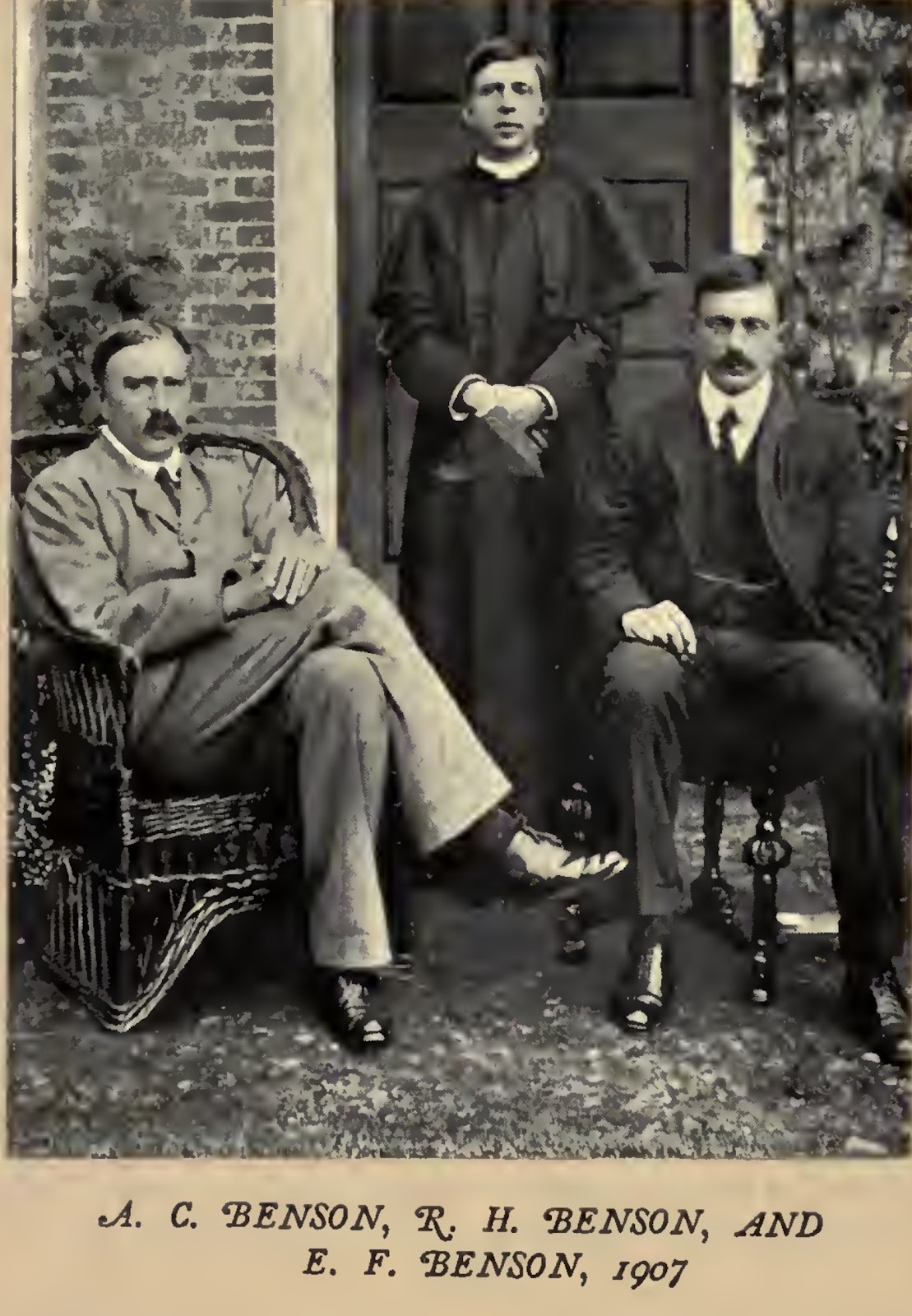 ....nothing that he could see would be so fearful as that which was unseen....

Arthur Christopher Benson (1862-1925) was the eldest of the three Benson brothers, sons of an Archbishop of Canterbury.  They made signal contributions as academic (A.C), cleric (R.H.) and writer (E.F.). All left books, including peerless and varied collections of supernatural fiction. Each took some inspiration from M.R. James, the genre's master prose stylist. Each wrote psychological and antiquarian tales, but also pieces we would today call folk horror.

Not sure why I am so tardy in reading E.F. Benson's two brothers. ACB's stories, sampled this week in my new favorite anthology, The Big Book Of The Masters Of Horror, Weird And Supernatural Short Stories, are the opposite of E.F.'s: Arthur's protagonists rise to the challenge of vastation and fearlessly and consciously attend their respective appointments in Samarra. None have any curiosity about spiritualism or archaeology or winter sports. In fact, ACB's stories do not take place in the modern world at all. At best estimate, I would say the stories noted below take place before the Reformation. "The Temple of Death," seems to unfold before about 500 A.D., perhaps earlier.

As a point of personal taste, my favorite story is "The Red Camp." The reader will note some interesting contrasts to "A Warning to the Curious." In it, cash-poor and debt-ridden landowner uses a cursed hidden treasure to save the soul of its spectral guardian from earthly bondage.

I've been an atheist and a Marxist for almost four decades, and have never had much curiosity about Christianity or religion. I think some readers in our genre bring their own personal hang-ups about religion to it, which might be an obstacle to appreciating the depth of feeling and technical excellence of ACB's stories. If you think believers are fools, it can lead to a degree of aesthetic tone-deafness. Or perhaps I've recently read (and enjoyed!) too many essay collections by S.T. Joshi?

....the two young men drew near to the closed window; the shutters were tightly barred, and across the panels was scrawled in red, in an uncertain hand, the words CLAUDIT ET NEMO APERIT, which Mark explained was the Latin for the text, He shutteth and none openeth. And then Mark said that the story went that it was ill for the man that opened the window, and that shut it should remain for him.

One who has looked into the Unknown finds it hard to believe again in the outward shows of life....

....Roderick had a strange dream; it seemed to him that he wandered over bare hillsides, and came at last to the pool; the peak rose sharp and clear, and the water was very black and still; while he gazed upon it, it seemed to be troubled; the water began to spin round and round, and bubbling waves rose and broke on the surface. Suddenly a hand emerged from the water, and then a head, bright and unwetted, as though the water had no power to touch it. Roderick saw that it was a man of youthful aspect and commanding mien; he waded out to the shore and stood for a moment looking round him; then he beckoned Roderick to approach, looking at him kindly, and spoke to him gently, saying that he had waited for him long. They walked together to the crag, and then, in some way that Roderick could not clearly see, the man opened a door into the mountain, and Roderick saw a glimmering passage within. The air came out laden with a rich and heavy fragrance, and there was a faint sound of distant music in the hill. The man turned and looked upon Roderick as though inviting him to enter; but Roderick shook his head and refused, saying that he was not ready; at which the man stepped inside with a smile, half of pity, and the door was shut.

The Hill of Trouble

....he stepped back, and though he had a feeling that it would be wiser not to go, he put it aside and went boldly into the circle of stones. He stood there for a moment, and then feeling very weary, sate down on the turf, leaning his back against a stone; then came upon him a great drowsiness. He was haunted by a sense that it was not well to sleep there, and that the dreaming mind was an ill defence against the powers of the air — yet he put the thought aside with a certain shame and fell asleep.

Out of the Sea

...."Come," said Father Thomas, turning upon him, "you speak thus of a thing, as you might speak of a dog — what is it like?" "Nay," said Henry, "I know not; I can never see it clearly; it is like a speck in the eye — it is never there when you look upon it — it glides away very secretly; it is most like a goat, I think. It seems to be horned, and hairy; but I have seen its eyes, and they were yellow, like a flame."

....The Holy Church hath power indeed over the spirits of evil, the devils that enter into men. But I have not heard that she hath power over the spirits of the dead, and least of all over those that lived and died outside the fold. It seems to me, though I but grope in darkness, that these poor spirits grudge the treasure that they fought and died for to the hands of a man who hath not fought for it.

….Between the candlesticks and behind the skull was an old and dark picture, at which he gazed for a time, holding his taper on high. The picture represented a man fleeing in a kind of furious haste from a wood, his hands spread wide, and his eyes staring out of the picture; behind him everywhere was the wood, above which was a star in the sky — and out of the wood leaned a strange pale horned thing, very dim. The horror in the man's face was skilfully painted, and Anthony felt a shudder pass through his veins. He knew not what the picture meant; it had been given to him by the old Italian, who had smiled a wicked smile when he gave it, and told him that it had a very great virtue. When Anthony had asked him of the subject of the picture, the old Italian had said, "Oh, it is as appears; he hath been where he ought not, and he hath seen somewhat he doth not like." When Anthony would fain have known more, and especially what the thing was that leaned out of the wood, the old Italian had smiled cruelly and said, "Know you not? Well, you will know some day when you have seen him;" and never a word more would he say.

The Temple of Death

....After the meal the man asked him to tell him something of the new faith, and Paullinus very willingly told him as simply as he could of the Way of Christ.

The man listened with a sort of gloomy attention. "So it is this," he said at last, "which is taking hold of the world! well, it is pretty enough — a good faith for such as live in ease and security, for women and children in fair houses; but it suits not with these forests. The god who made these great lonely woods, and who dwells in them, is very different," — he rose and made a strange obeisance as he talked. "He loves death and darkness, and the cries of strong and furious beasts. There is little peace here, for all that the woods are still — and as for love, it is of a brutish sort. Nay, stranger, the gods of these lands are very different; and they demand very different sacrifices. They delight in sharp woes and agonies, in grinding pains, in dripping blood and death-sweats and cries of despair. If these woods were all cut down, and the land ploughed up, and peaceful folk lived here in quiet fields and farms, then perhaps your simple, easy-going God might come and dwell with them — but now, if he came, he would flee in terror." 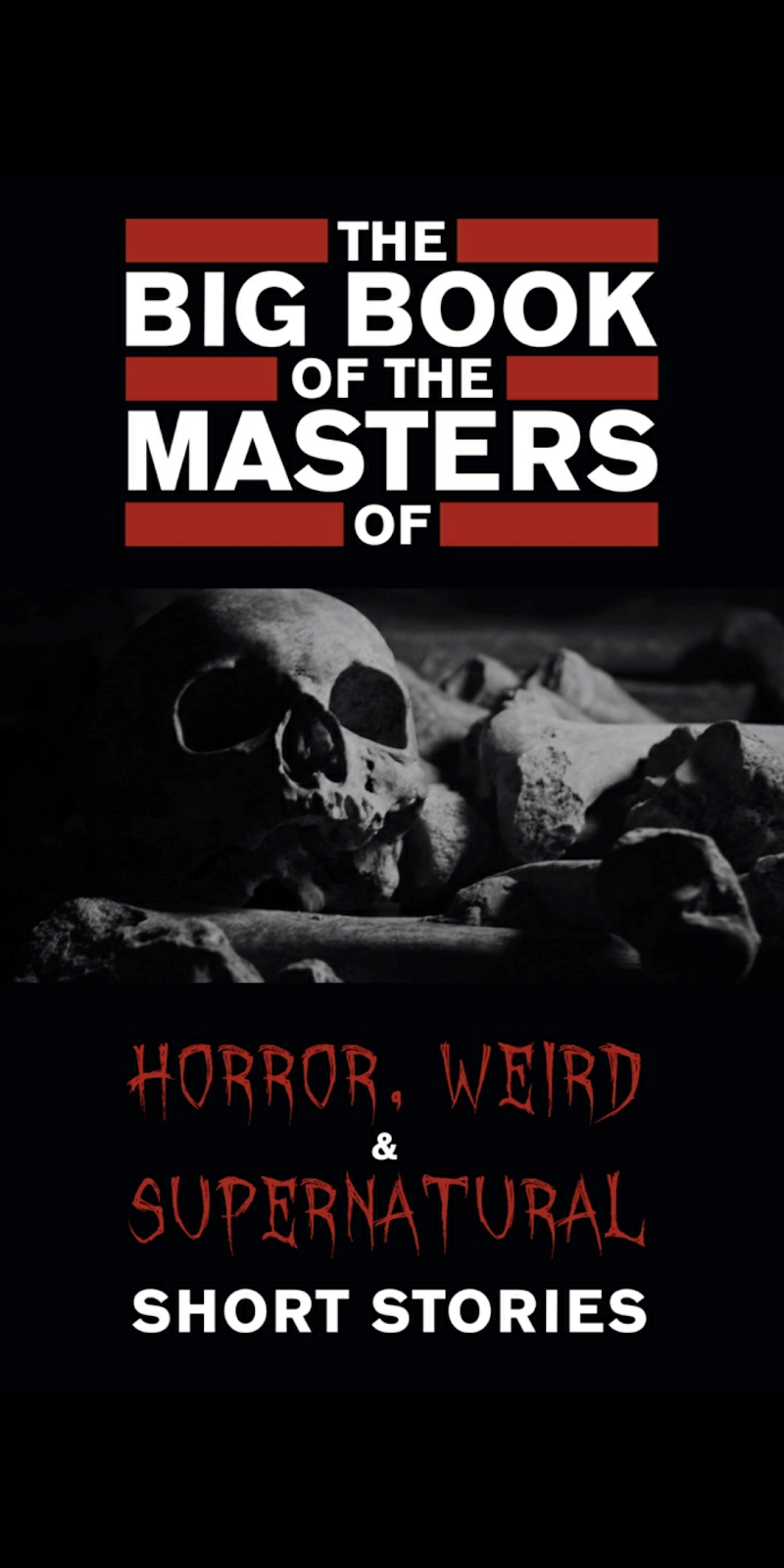 Posted by Jay Rothermel at 5:39 PM