Welcome to a rebarbative rural Western Massachusetts. It is shot-through with monstrous facts and uncanny contexts of real aesthetic power and the moral voice of a sleep-deprived, keening Jeremiah.

Gateways to Abomination by Matthew M. Bartlett makes Mark Samuels' tales of a universe succumbing to entropy in slush piles of UHF static look like stories about hijinks at a vicar's tea party.

The collection contains over thirty stories. Some are brief slices of life, a few are more rounded. The entire collection can be read in a day, if not a single sitting. But I do not recommend such intense exposure. Like Ramsey Campbell, Matthew M. Bartlett not only depicts situations where perceptions are warped and lethally inaccurate, he attempts to impose those sensations on the reader through his fun-house strategies delineating setting, characters, events, and durations.

By far my favorite story, for its ability to subvert itself and keep upping the horror ante, is "when I was a boy – a broadcast."

It begins by posing as a reminisce of rural youth:

When I was a boy in Leeds, I had a friend named Christopher Dempsey who lived out on Cemetery Hollow Road. He had a younger brother named Alex and a backyard that emptied out into an expanse of woods that hid most of our boyhood exploits, which for a time were no less innocent than catching and eating frogs....

But menacing facts and events accumulate in the story's second and third paragraph:


....Christopher and Alex each seemed to be clothed in dirt. It smudged their faces at the corners of their mouths and settled into the cracked skin at their elbows and knees. Their toes were so encased in filth they were never once kicked out of King's Grocery for being shoeless; a glance at their filthy feet fooled most into thinking the boys had donned dense and dirty slippers.
Their mother, though not as obviously caked and clotted with filth as her boys, seemed to be filthy with secrets. She was thick-hipped and black-haired and wore huge glasses and colorful faded sashes tied at her waist. She favored dark denim pantsuits and she smoked up hand-rolled cigarettes one after the other. She was ugly and beautiful and fat and curved and she did not wear lipstick neatly like Mother wore lipstick. She spent hours behind the closed door of her room listening to monotonous and eerie orchestral music. She read strange books. She was quiet and sullen and cursed at her boys and humiliated and hated them. She took to me instantly, foisting her boys off upon me on many a hot afternoon and staring strangely after me as we fled into the woods....


But "when I was a boy – a broadcast" is not simply a memory of the benighted Dempsey family. The narrator peels back and displays something more than lumpen crudity; this is a family, particularly a mother, diagnosed as a social disease:


....I turned to leave and She beckoned me from the doorway. She was wearing a ratty pink robe that hung open obscenely. Its browned sash curled like a snake at her feet. I seem to remember--though it cannot be--that a newly lit cigarette jutted from between her disturbingly large big toe and its curled neighbor, sending a seductive tendril of smoke up past the webbed blue veins of her thighs, past the sweaty cramped horizons of her belly, past the glitter stuck in clumps between her ample, dangling breasts, past her eyes, one of which twitched, past her hair, which was greasy and brown and frayed. I turned again to run and fainted dead away....


It quickly follows, however, that the social disease has conquered more than the Dempsey family. The narrator begins to get a sense of the rest of the iceberg:


....I cannot describe what was happening to me when I woke. It was my dream come true and my nightmare. Her face pushed into me everywhere. She pulled from me pleasures I'd never imagined and pulled and bit at my skin angrily until I shrieked and pulled away in pain and shame. Cigarettes lay broken and smoking in ashtrays all over the room. There must have been scores of them, providing ample light to see the faces watching us from all the corners of the room. I thought I saw Guy grappling with my father over scraps of raw meat. I remember a clock whose face was an obscene caricature of a black man, another whose hands were crudely rendered pricks. I remember a dog rolling on a milk-soaked carpet, its belly a mass of grotesque breasts. She saw me looking frantically about the room and covered my eyes with her hand, which smelled of sex and nicotine
There was music playing, I remember, and there were whispers and bursts of jeering laughter. I think at one point a dog lapped at the bottom of my foot. I endured a cigarette burn whose ghost still haunts my eyebrow. I remember the sounds of someone vomiting. But mostly there was her, from every angle and in deep in every fold. Our bodies roiled and boiled and pushed into each other unspeakably. I was terrified of her, and terrified that it would end. I was sure I would die, for there were long stretches of time when her flesh filled my throat and seemed to be on the verge of somehow invading my very lungs. I wanted to die, and I wanted to go on forever....


At this point "when i was a boy – a broadcast" is about two pages from its pulverizing climax. I won't spoil it by describing it here, but the narrator both descends to and supercedes his community's depravities and crapulence.

Gateways to Abomination is not a reassuring book. It does not try to make the reader comfortable, even at the end. Bartlett's goal - a goal achieved - is to curdle readerly confidence in our own senses, our judgment, and in our apprehension of the world outside stories. 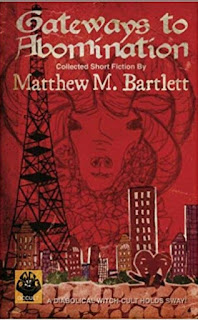 Posted by Jay Rothermel at 4:54 PM