Shea's Bay Area Cthulhu stories have several strengths: mastery of language, scene-building, and high skill with prose.  Most neo-Cthulhu stories coming out today never rise above the level of fan fiction, but Shea is a stylist first, and the braiding of his Bay Area world with that of the Old Ones is at a very high aesthetic level.  No occult detectives, no scholars seeking after the outre, no armed vigilantes or private dicks, just working people and people too old to work who find a fierce desire within themselves to defend their community when the shadows gather.

Notes and excerpts below.

....Michael Shea was anything but a pastichist; even when he was writing in novels or tales that avowedly imitated the work of others, his own dynamic originality kept bursting through—and the result is a series of works that, while drawing inspiration from prior texts, are infused with the distinctive vision of their creator.

....he quickly decided that he needed to draw upon his own Californian roots to generate tales that truly evoked the realistic topography—human, social, cultural, historical—of Lovecraft's best narratives.

....Shea, eschewing simple-minded moral condemnation, finds in these exiles from polite society a brooding determination to persevere in the face of poverty, crime and social condemnation that is strangely ennobling.

....Shea sensed that the cosmic and the human were not mutually exclusive. In such scintillating tales as "Copping Squid," "Dagoniad," and "Tsathoggua" he slyly leads the reader to the perception of unthinkable cosmic terror by means of characters whose all-too-human flaws make them the reader's eyes and ears as the awesome revelation slowly dawns.

....Shea both drew inspiration from H. P. Lovecraft and also transmuted Lovecraft's conceptions into his own by the alchemy of his imagination.

....he evolved into a genuine disciple whose vibrant originality and sensitivity Lovecraft would have recognized and admired.

"Fat Face" bakes in the heat of Los Angeles dawns and dusks, of urban neighborhoods of coffee shops and old hotels, of superseded side streets of once pleasant residences left behind long ago. Its characters have fallen off the bottom rung of class society, and live an atomized lumpen existence, self-sedating and kidding themselves they have a future or any life plans worth thinking about. Bukowski has nothing on Shea with this milieu.

....She dreamed of a city like Hollywood, but the city's walls and pavements were half alive, and they could feel premonitions of something that was drawing near them. All the walls and streets of the city waited in a cold-sweat fear under a blackly overcast sky. She herself, Patti grasped, was the heart and mind of the city. She lay in its midst, and its vast, cold fear was hers. She lay, and somehow she knew the things that were drawing near her giant body. She knew their provenance in huge, blind voids where stood walls older than the present face of Earth; she knew their long cunning toll to reach her own cringing frontiers. Giant worms they were, or jellyfish, or merely huge clots of boiling substance. They entered her deserted streets, gliding convergingly. She lay like carrion that lives and knows the maggots' assault on it. She lay in her central citadel, herself the morsel they sped toward, piping their lust from foul, corrosive jaws.

This is an astonishing and masterful story.  It far exceeds Bloch's Poe ventriloquism, and employs it beautifully in a tale of revenge worthy of a Montresor scion. Our narrator carries out an ingenious act of revenge against his former wife and her retinue, with the help of a shoggoth, from "roses" from Yuggoth, some "hounds" and various other tarantulaic and boiling entities ready to partake of  a bounteous May Eve.

A shadow over Frisco (and shadows are plentiful in Shea's Frisco) in the form of a new tech company wows the bohemian milieu. The avatar of Cthulhu comes in form of a business "master of the world" named Chip Shugrue; he has deep pockets and a generous checkbook. Shea gives us a big social canvas of characters, for each of whom Chip's money (and his portal project) become end-all and be-all.

The presentation itself is the devil's own Ted Talk.

....And that was when, as one, they felt the sudden presence of the Entrepreneur, the Holder of this Account into whose bottomless wealth they'd just disgorged their holdings. The Holder of the Account hung just below them in the black gulf.

They felt him as an immense subjacent gravitational mass. They felt the tug of a leviathan hanging just under the keel of their collective consciousness.

And his sudden presence gave them all a wonderful moment of childhood. It was that Daddy feeling—that the grand, glorious, but frighteningly vast muchness and suchness of the world was mediated for your little self. That Daddy's greater, loving mass hovered between you and the immensity, a loving canopy of concern, a big ally in the bigness of it all....

Daryl is a social dropout working as a laborer on a crew digging holes for swimming pools in Marin County.

....What had these glacial horrors to do with him? It was as if, with ghostly fanfare, the Beyond had delivered its message to the wrong man on the wrong world.

Chester is an old widower approaching the end.  He lives in a transient hotel in Frisco, a recurring location for Shea and artfully evoked. Chester gets a life-saving cash windfall, then learns what he must do to earn the pay.

....Galvanized, he sits up to swing his legs off the bed—and discovers a terror that dwarfs what he's already feeling: his body has not stirred. Violently, he again exerts his will … and his frame lies untouched by it, calm as sleep.

A non-Bay Area story, rare for this collection.  "The Battery: takes place on an isolated strip of coast in South Florida. One of Shea's great subjects is people confronting the unspeakable and reaching out in solidarity for allies.  His heroes are rarely intellectuals or scholarly, but in this story a couple are.

....Do you two realize that we have occupied our post of vigilance, wherever in the world it took us, for more than thirty years? And generations before us have done likewise, but to us it has been given to discharge our trust and confront the apocalypse. And at the same time it has been given us, near the end of our watch, which is the end of our lives, to find our successors, and to meet at last our dearest friends."

It is easy to understand why "Copping Squid" has gained a reputation as one of Shea's best stories.  Like many of the best, it is a San Francisco Bay-area story, and takes us into the hills east of Richmond. What Shea's protagonist finds there, and what he comes away with, may not be beyond human ken, but they are things beyond reason.

....And the knell of that voice awoke winds in the night, and the winds buffeted Ricky as though he hung in the night sky within the eye, and Ricky knew. He knew this being into whose view he'd come! Knew this monster was the king of a vast migration of titans across the eons of the countless Space-Times! Over the gale-swept universe they moved, these Great Old Ones. Across the cracked continents they trawled, they plundered! Worlds were the pastures that they grazed, and the broken bodies of whole races were the pavement that they trod!

"dagoniad" details the opening guns in the battle to defnd the bay area from the Old One in the Bay. The heroes are the owne4r of a hole-in-the-wall bookstore and a young prostitute: both are women. It's a graphic and rousing story.

"You know what we should do? We should defy him."

"Dagon." Dee said it dully, not quite asking.

"Dagon. Look at this thing! What good could meekness do us against its master? I say fuck him! What right does he have to our world? To our lives?"

"Tsathoggua" is the culminating Bay Area story.  It sees the founding of the "fellowship of the ring" of individuals who have survived previous encounters with Old Ones and their minions, have had enough, and are ready to join together to draw a line.  These are not elite and learned academics, nor students, or "seekers after the outre." They are seasoned working class people living a precarious economic existence in San Francisco, but who view it as their town.

A man makes his own god by accumulating illegally dumped toxic waste in an abandoned mineshaft near Richmond, California.  Shea is a master dramatizing each character through suggestive initial bits of plot before the main course. He has the skill and the confidence to switch through multiple characters, giving his short stories and novellas the breadth and scope of novel.

...."You gotta meet my Auntie some day," Alex said, scanning that view. "She's like half Miwok or something. Anyway she told me this mountain Chip's mine is in was like a Spirit Place—like where you go to fast and have visions? Go to like, face your demons and stuff."

"Spirits! Rad. I wish there was something cool like that about it. That would be something, but I think what these guys are doing up here is just plain old creepy and criminal."

"Yeah, but we don't really know that, not for sure. Anyway, we're definitely good and late now. Maybe he's just gonna fire us. When Chip said get back on time, he put a lot into it." 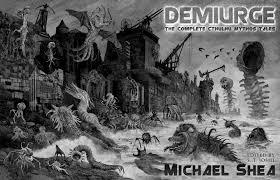 Posted by Jay Rothermel at 6:22 AM