Some blood-streaked thing crawling into the light: The Visible Filth by Nathan Ballingrud (2015). 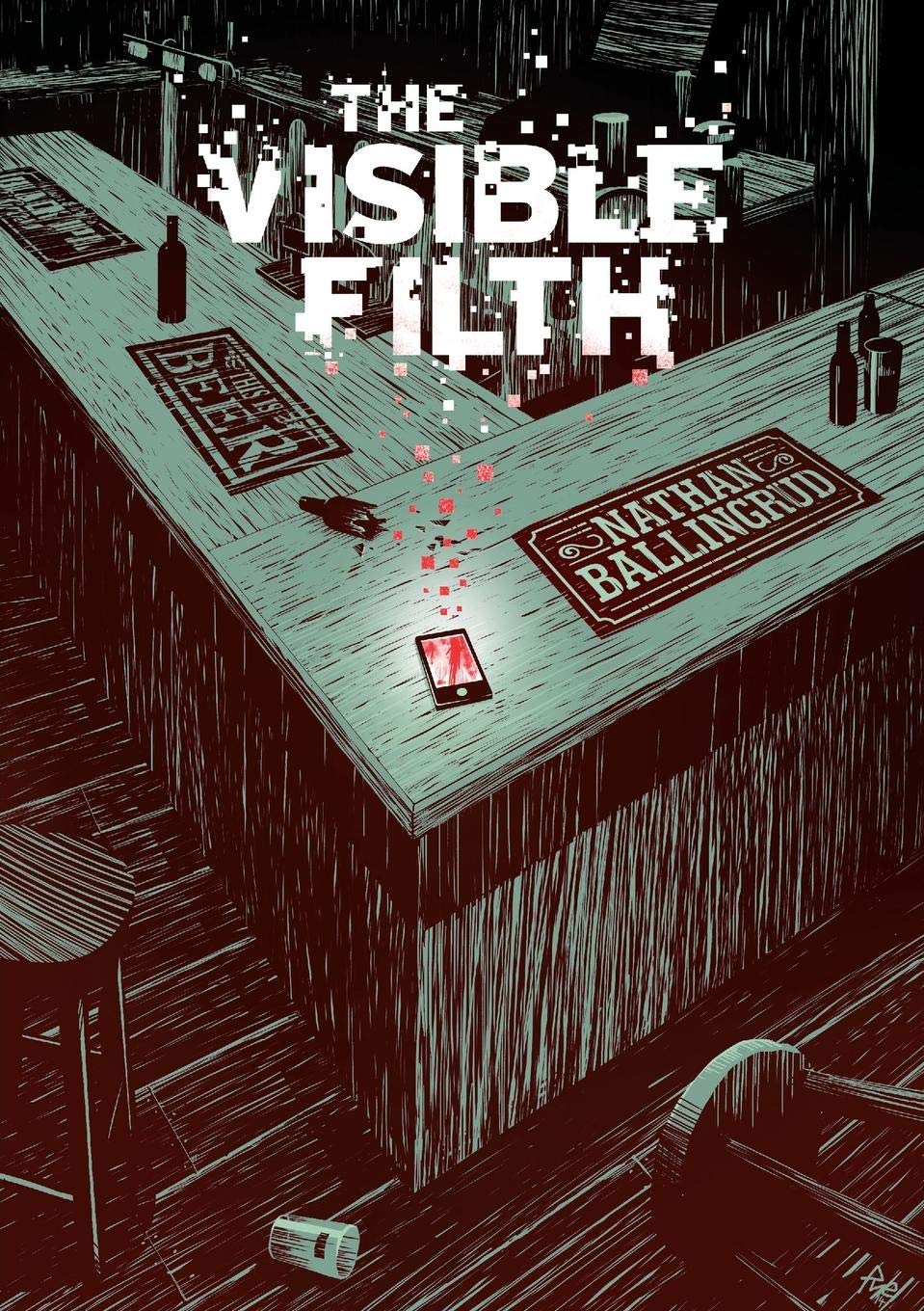 The Visible Filth is a beautifully constructed novella. It follows several tumultuous days in the life of Will, a New Orleans bartender who leaves a lot to be desired, as the current girlfriend eventually concludes:

"You don't have any idea what you want. You know what I think you want? Nothing. I think there's nothing there to satisfy. I think you're a mock person, you're some kind of walking shell."

Will knows it, but it's easier to bartend in a hole-in-the-wall joint among the lower depths than make a move that will translate his life into something else.

....Will had spent his life skimming over the surface of things, impatient with the requirements of engagement. He told himself that this was because he was open to experience in a way most people weren't, that you sapped the potential for spontaneity from life if you regimented your hours with obligation. This rationalization came upon him in college, shortly after he dropped out, converting all that money invested by his parents into so much tinder for the fire.

Most of the time he believed it....

But then one night at work mischance takes Will in hand. After a fight in the bar, he finds a cell phone. That night a couple of disturbing texts come through.  By morning there are images, too.

....He tapped his finger on the first one so it ballooned to fill the screen.

It looked like a close-up shot of a sleeping man's face. He was middle-aged, balding, with a large, flat nose; his face was soft and rounded, like the features of a stone carving which had been worn smooth by centuries of wind and rain. There was nothing sinister about this picture; it might be an intimate portrait taken by a lover, or a dear friend.

The second was the same man from the same angle, but taken from a few feet further away. In this picture the man was clearly dead, felled by a violent strike to the head. The rounded dome of the man's skull, cropped out of the first picture, was here depicted in its shattered complexity: bone and brain and blood extruding from the crown like a psychedelic volcano caught in mid-expulsion. The man was lying on the sidewalk. The blood around his head reflected a disc of overhead light, a streetlamp or a flashlight. The picture had been taken at night. He noticed what appeared to be a wedding band on the man's left hand, which lay palm up, white and plump.

The third picture revealed a new setting. This one had been taken indoors, under a harsh light, probably a fluorescent. Seventies-style wood paneling covered the wall in the background. A utilitarian white drafting table occupied the foreground, and resting atop it was the same man's head, severed from its body. It sat planted straight on the table; someone must have taken the time to balance it, to arrange it just so. The wound in his head was not visible from this angle. No blood marred the scene, save the inevitable blackened ring around the neck. It seemed that some care had been taken to clean the blood from his head, primping him like a schoolboy for his yearbook photo. A slender red book lay on the table behind it, partially obscured, its spine facing the camera.

Will tried to slide on to the next one, but his fingers had gone numb and the phone clattered to the floor. He experienced a wild and irrational fear that someone had heard him and would see what he was looking at, and he felt an overwhelming shame – as though he'd been caught looking at the most outrageous pornography, or as though these ghastly photographs depicted his own work.

Putting the phone back on the table, he closed his eyes and forced himself to calm down. His breath was shaky, his nerves jumping. It occurred to him, abruptly, like some divine communication, that he did not have to look any further. He knew something awful had happened, that a murder of grotesque proportions had been committed and documented, and that any further examination was unnecessary. He should go to the police right now and wash his hands of it.

But stopping was unthinkable. He scrolled to the fourth photograph.

In this one, someone had gone to work on the head with an almost medical precision, and an artisan's hand. Using the killing wound as a starting point, the man's scalp had been sliced into a star pattern, and the skin pulled down from the head in bloody banana peels. The soft, generous features of his face, which had suggested to Will only moments ago the close proximity of someone beloved, which suggested both kindness and the passage of time, were obscured now by the bloody undersides of themselves. The skull had been scraped clean, or nearly so. The eye sockets had been scooped hollow. The table beneath the head was festooned with the gory splashes of the artisan's hard labor.

Only the video clip remained. Pressing the button was not like scrolling through the pictures; he could not pretend he was carried by momentum. This was a separate choice. It was his second chance to turn away.

The video player took a moment to load, and then filled the screen with the shaky image of the head on the table. A blare of static shrieked from the phone as someone said something unintelligible. Will tapped the button to lower the volume, conscious of the sound intruding into the atmosphere of his apartment, like a species of ghost. He checked over his shoulder, the sense of proximity to another person prickling his nerves once more, and then held the phone close to his face to be sure he wouldn't miss anything. Shame, fear, and a weird thrill filled his body.

The view stabilized, holding firm on the severed head, which was canting slightly to one side. The fourth picture had already been taken: careful ribbons of flesh suspended like wilted petals over the dead man's face. The top of the skull had been shaved down, leaving a red, raw hole just above the temple. A girl stepped into frame, her back to the camera. She had straight blond hair, an athletic body. She straightened the head again, held it a moment to make sure it stayed in place.

"Oh my god I can feel it," she said, and jerked her hands away.

"Get the fuck out of the picture!" Another girl's voice.

She retreated, and a calm settled over the image. A slight movement of the camera as a heart pounded hard in the chest. A stifled, nervous giggle. The head shifted slightly, as if it had heard something and had to turn a fraction to listen more closely. Then it moved again, and something seemed to shift in the darkness of its open skull.

Four thick, pale fingers extended from inside the hole and hooked over the forehead. Someone screamed off camera and the image skewed wildly. The video ended.

"Fuck!" He flipped the phone over, turning to see Carrie standing beside him. He felt slow and disjointed, as though he'd dropped a tab of acid. "When did you get home?"

"Just now." She wasn't looking at him, though. "What are you looking at?"


The book with the red covers is called
The Second Translation of Wounds, and I hope we hear more about it, and Will, in future.

Ballingrud is a master of suggestion, confident the reader will do most of the work. He lets us process the accumulating clues until the puzzle is, suddenly and breathtakingly, complete. 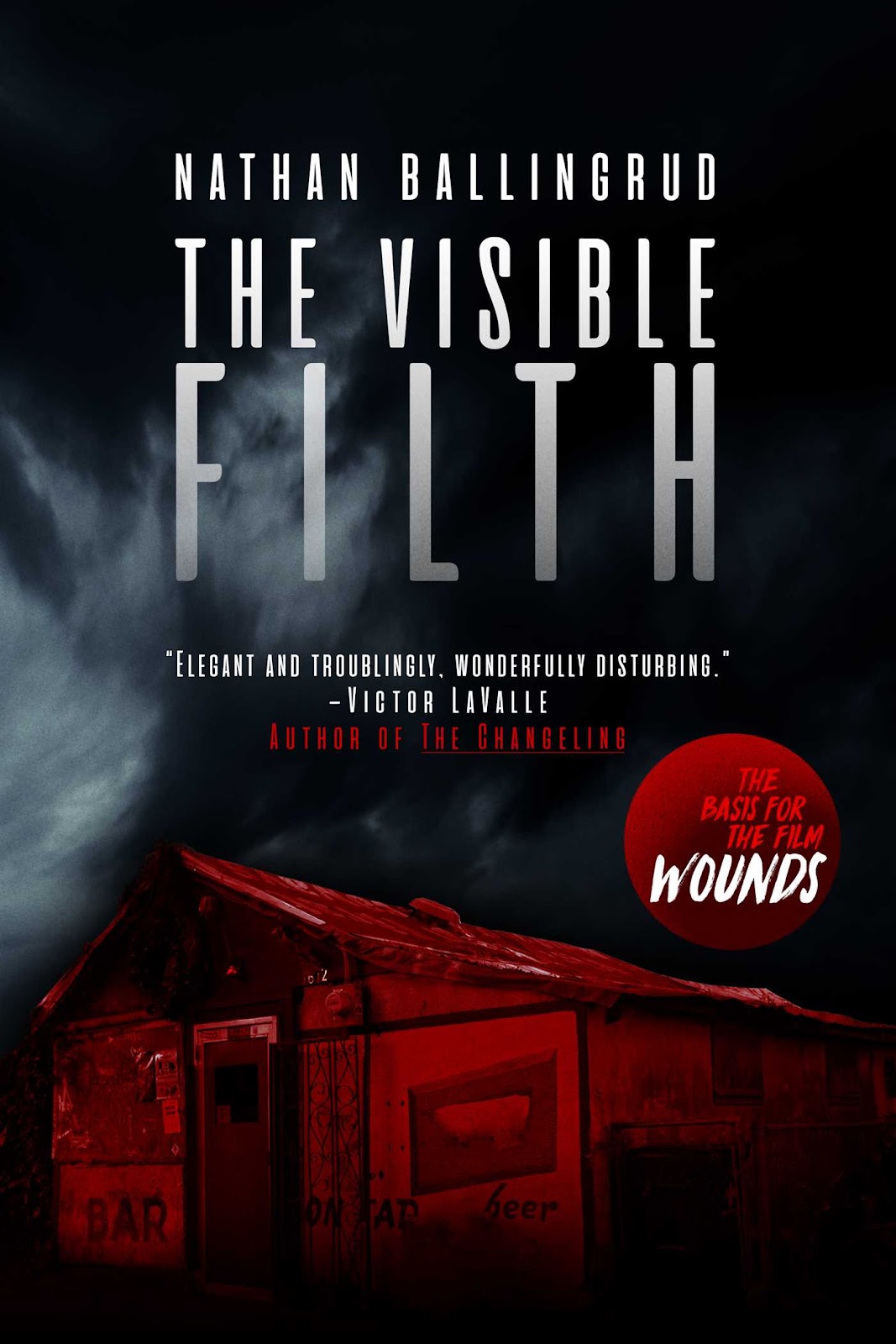 Posted by Jay Rothermel at 5:07 PM