Only matriarchy can save us: Island Life by William Meikle (2001).

....Rawhead growled in his chest. His burned face pained him; he wanted to be away from here, away in the cool of a birch-thicket, moon-washed.

His dimmed eyes found the stone; the homosapien was nursing it like a baby. It was difficult for Rawhead to see clearly, but he knew. It ached in his mind, that image. It pricked him, it teased him.

It was just a symbol of course, a sign of the power, not the power itself, but his mind made no such distinction. To him the stone was the thing he feared most: the bleeding woman, her gaping hole eating seed and spitting children. It was life, that hole, that woman, it was endless fecundity. It terrified him.

Rawhead stepped back, his own shit running freely down his leg. The fear on his face gave Ron strength. He pressed home his advantage, closing in after the retreating beast, dimly aware that Ivanhoe was rallying allies around him, armed figures waiting at the corners of his vision, eager to bring the fire-raiser down.

His own strength was failing him. The stone, lifted high above his head so Rawhead could see it plainly, seemed heavier by the moment.

"Go on," he said quietly to the gathering Zealots. "Go on, take him. Take him." 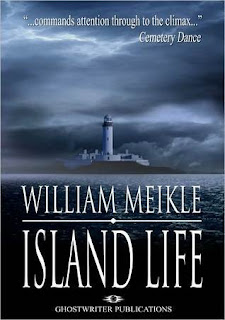 Island Life is an ambitious novel.

Set on an isolated Hebridean island dominated by a lighthouse, it features a handful of characters whose everyday lives intersect with disaster.

Meikle tells the story from multiple viewpoints that encompass the island community. He alternates two timelines.

As I said, this is an ambitious novel.

Trouble begins when an assortment of archaeologists open an ancient burial site. This strengthens the male entity trapped within: Calent.

Calent and his minions make themselves felt in no uncertain terms: our islanders meet merciless and cruel ends.

Like Rawhead Rex, Calent reeks of maleness. The matriarchal clans of prehistory were his negation. The first five hundred years of Christianity were still sufficiently infused with a pagan Earth-Mother material basis of social life to thwart Calent. But since then, with the thinning of old folk faith, his power has grown. In his tomb he has accumulated sufficient power to sway minds of those nearby.

Calent commands, "Dig here!" and the archeologists dig, freeing him.

Barker's Rawhead is not a denizen of a Scottish island. And he does not lay asleep and dreaming like Calent. (Or Cthulhu). He is buried beneath Three Acre Field, beside "orchards and hop-fields of the Kentish Weald."

However, Meikle's Calent, like Rawhead, wreaks bloody havoc. (Rawhead never had Calent's monstrous minions, and Zeal can be thankful for that.)

But the everyday social order is saved in both tales by a deeply encoded historical reverence for the Female/Mother principle. In the shape of a small football-sized stone sculpture of the prehistoric Venus.

....For a second Meg and Anne had seemed to merge and grow, taller, then taller still, an impossible, eight-foot personification of woman, like a Neolithic sculpture, legs like tree trunks, hanging pendulous breasts and a massive, stretched belly, a belly in which an unborn child writhed with life.

It had raised itself high over Calent, and he saw the fear in the old creature's eyes, just as the stone came down.

He watched as Calent was killed, then he blinked, and when he looked back there was only Anne and Meg again, but there was something different about them, something in their eyes.

Anne lifted the stone again, and Duncan wondered how she was managing it - there was no strain in her arms, no change in her expression. The remaining creatures fell back from her, cowering in the blue aura from the stone....

The horror genre has been, since the end of World War Two, infused with a sense of historical belatedness. All things of importance in the broader bourgeois world have already taken place. Horrific events and experiences are restricted to a suffocatingly narrow horizon of the individual. (The revolutionary impact of Romero's early films can be seen as a strong counter-thesis to this trend, though "Romeroism" has today been reduced to the "Walking Dead" cliche.)

Ambitious horror has attempted the large social scale. Stephen King's 'Salem's Lot and The Stand are clear examples. So are novels by Dan Simmons. (This does not make them aesthetically superior to bijou social
x-rays by Shirley Jackson or family romances by Ramsey Campbell.) But one must acknowledge the scope of the author's ambitions.

Island Life is an anxious and determined novel with a dozen or more characters, a traversable landscape, and a deep historical context for its tragedy and triumph.

And best of all, it has a lighthouse!