Late magic: The Children of the Pool and Other Stories by Arthur Machen

....There was one circumstance which I failed to mention, when I consulted the friend who wrote me the letter of advice. I am not sure why I left it out of my story; possibly from a whimsical dislike of making the case too complete, possibly from a feeling, equally whimsical, that it was as well to keep one card at least safe and secret in my own hand.

The Children of the Pool and Other Stories by Arthur Machen

This collection of Machen's late career short stories does not stint. Each is richly imagined, complicated, and deftly presented. Like his late novel The Green Round, sniffily dismissed by some, Children of the Pool contains stories as powerful as any he wrote. The fact that most are presented in a collagist's rhetorical format, back-to-front, replete with sideways interjections, makes them all the more arresting. Machen's authorial voice reassures us, and we are always confident the big picture will snap into focus in the end.

"The Exalted Omega" was the hardest story to really grip and hold. Machen lives to employ the high-wire art of coincidence, but here coincidence seems powerless to cement two hemispheres of a tale into a really satisfying unity.

Still, the portrait of J.F. Mansel, occupant of rooms in London's Gray's Inn, is a compelling depiction of human self-isolation. After his death, Mansel's profound misanthropy still haunts his apartment, and this is succinctly conveyed. The journalist narrator's attempts to rationalize earlier manifestations of the supernatural at a seance underscores the absurdities most armchair skeptics go to (speaking as one myself).

"Children of the Pool" is in a long line of sylvan vacation horror stories that UK writers have always excelled at. It features a compelling evocation of setting. 'There is such a thing as a “sad” landscape, even when we who look at it are feeling jovial; and if we think it is “sad” only because we attribute to it something derived from our own past associations with sadness, Professor Koffka gives us good reason to regard the view as superficial. That is not imputing human attributes to what are described as “demand characters” in the environment, but giving proper recognition to the other end of a nexus, of which only one end is organised in our own mind.'

The success of the story rests on how convincing Machen is at a rational explanation for the uncanny visitations experienced by Mr. Roberts.

"The Bright Boy" is to me a stunning display of Machen's skills as a writer. Who would dream of writing, in the modern world, about a corrupt and criminal man who is what used to be called a "midget"? Yet Machen accomplishes this, and the final revelation fits snugly into place.

Machen's reputation today rests on horror stories, whose titles are too familiar to rehearse here. But the Machen stories which mean the most to me are his works of un-horror, of uncanny human or supernatural goodness. "The Tree of Life" is one of my favorites of this style; I have read it several times in the last few weeks. Machen builds up an unbearably suspenseful atmosphere in both halves of the story, and we are convinced (this is Machen, after all) that the final revelation will be grimly heartbreaking. I won't spoil the actual climax, but encourage you to read the story today.

"Out of the Picture" will please readers who prize Machen's weird horror stories.

Avant-garde painting and psychopathology are here braided perfectly together. "M’Calmont had depicted open spaces in the midst of mysterious woods, narrow valleys edged with grim rocks, paths that wound in and out by lonely lands to shattered walls on a far height, trees of strange growth hanging over a well, glades glooming with twilight and the coming storm. There was an enchantment; but the incantation was of oppression and terror. There were three things that I noticed as curious: the first was that in every picture M’Calmont had introduced fire: logs burning under a broken wall, flames breaking out of yellowish smoke in the forest clearing, a fire by the well, a fire on the far hill-side. Water, also, was represented in each canvas; well, or brook, or pool in the woods; and in every one of them there was the figure of a man, the same man, so far as I could judge. The figure was roughly dressed in the costume of an eighteenth-century countryman, in ragged clothes, with a scarlet cap on his head. He was depicted as tending the invariable fire, perhaps, or leaning on his staff, or half-hidden behind the trunk of a tree, or crouching among thorns on the border of a broken road. As I passed slowly from picture to picture, I noticed that the figure became more prominent. At first, it was barely seen in the background. Then it came forward into the middle distance, and at the end of the tour, the recently painted pictures, as M’Calmont told me, it was prominent in the foreground. In one picture he led a procession of torch-bearers into a wood as the night came on; but mostly he was alone in these desolate places that M’Calmont had made."

"Change" is another vacation horror story, the superb tale of a changeling. Of course with Machen such a bald statement of plot is pointless. The magic is all in his presentation. 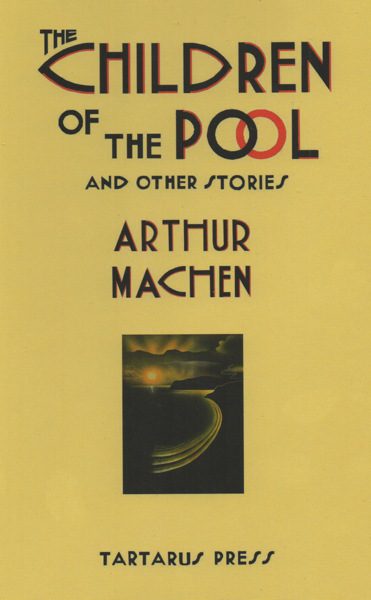 Posted by Jay Rothermel at 6:22 PM