Et in Arcadia Ego: A review of Secret Europe by John Howard and Mark Valentine

Secret Europe is redolent of the world of Joseph Roth, Arthur Schnitzler, Robert Musil, Franz Kafka, Vladimir Nabokov, Stefan Zweig, Walter Benjamin, and Strauss waltzes. Its liminal lanscapes exist along the northern and eastern limits of Wilhelmine Germany, and the Austro-Hungarian empire of Franz Joseph I. A few stories make forays into the post-World War One era; one, esoterically perhaps, after World War Two.

The stories are brief, written in an alembicated style well-suited to the recherché themes of the authors. Précieux characters are drawn from the a limited class horizon: cosmopolitan, educated petty bourgeois strata, the professionals and artists of the region and period, struggling to find their place, often nostalgic for older social contexts.

''Baltersan's Third Edition', Mark Valentine
Henry Baltersan is obsessed with creating a guide to learned terms in all European languages. And eventually, not just the languages of Europe's human inhabitants.

'Secret Byzantium', Mark Valentine
Von Krux, a young officer and scholar, turns back on World War One and crosses a frontier to Byzantium.

'The Silver Eagles', John Howard
World War One and the Bolshevik Revolution impact an ancient Hanseatic town. "....In the new world, as in the old, that which is real, or comes to be considered real and accepted as such, can take over and drive out all else before it."

'Silence and Fire', Mark Valentine
This story takes place in Karelia as the USSR begins its invasion of Finland. A young government official observes (with Nabokovian emotional distance) the aerial bombardment of his city. "It was odd how soon it seemed useless to do anything ordinary. The duties and diversions that had preoccupied us on 30th November were all no longer of the least consequence. In a day, a city that had been busy, if apprehensive, and full of activity, stopped what it was doing."

'The Other Salt', Mark Valentine
A naturalist visits a remote, melancholy marsh region along the Atlantic coast. He is searching for the source of a type of salt once used by Europe's ruling rich, but now thought lost. Landscape, weather, "atmosphere" and a shocking discovery are very well done.

'The White City', John Howard
A middle class journalist tries to hide from the implications of a coup in his country by taking a government job with the new regime. He hopes the slyly utopian and satirical postage stamps he approves will prevent Estland from stumbling "headlong into the wreckage and waste of a new dark age."

'The Baltic Circles', John Howard
Along the Baltic coastline shared by Kuronia, Estland, and Lietaunas, citizens become restive, and the rebellious, under the regional Stalinist politics regime. Howard's characters are young academics, filled with anticipation, but also sentimentally looking back to a superseded Hanseatic unity.

'The Girl with the Violin', Mark Valentine
A travelling cinema show arrives at Voivodina in the new Kingdom of the Serbs, Croats and Slovenes. A young man, much to the chagrin of his boon companion, falls for the beautiful young violinist Magdalena, from Trieste.

'The Goat-Eyed', Mark Valentine
A rumor begins circulating in the walled, four-gated city that goat-eyed human theives are preying on the populace. From four gate keepers, the city's guardians build up a police force, with unintended consequences.

'The Lion of Chaldea', Mark Valentine
A young academic from the Portugese New State is dispatched to Cadiz, Spain to research a project proclaiming the long historical unifies of the two Iberlian states. There he meets Dr. Ecquo, an old scholar, who is "convinced that the last peoples of Babylon, the Chaldeans, had sent out exiles across the known and unknown worlds, so that their faith might not be extinguished but would linger forever in the cultures of many far-flung places."

'Westenstrand', John Howard
The bittersweet visit to a liminal, ever-changing sandy island on the north German coast in the years preceding Hitler's chancellorship serves as a nice metaphor for national storm, disaster, and reawakening.

'The Unrest at Aachen', Mark Valentine
In Aachen, 1906, an agent of Luxembourg's secret service works to thwart the machinations of Kaiser Bill.

'Prince Aziz', Mark Valentine
Paris, 1937, the Exposition Internationale des Arts et Techniques dans la Vie Moderne. Student  Ferdinand Clair is posed as a prince while part of the display at the Mauretanian tent on the exhibition grounds. But after pretending to be a prince, it is not easy to stop.

'The Hunting Castle', John Howard
The 1949 alt-history Third Reich of Sarban or Robert Harris. In his hunting lodge, Chancellor Albert Speer is awakened by assassins. The story is well-done, told entirely through dialogue, and there are some happy nods for alternative history buffs.

'The Atelier at Iasi', Mark Valentine
"All, he reflected, except the most blasé, who receive an invitation to a private view, are bound to feel secretly flattered, no matter how widely they may think the invitation has been issued." An English writer living in Bucharest and a tale brimful of Aickmanesquetry.

'A Minor Official', Mark Valentine
The heartache of a Herzegovinian water inspector. "It made me wonder if it might be possible to design an emotional map of a country, to show in some way the thoughts that the land inspired, delineating in different colours the moods each part provoked. I smiled to myself at what my friends among the military surveyors would say to the idea. Their corps had rapidly made maps of the province following the annexation, and these were well-maintained: they did a very decent job; but naturally their interest was in military strategy, the broader tracks, bridges, passes, peaks, fords, and important settlements. And yet the mood of a land can affect even a soldier, or a surveyor, even a deputy water inspector."

'The Way of the Sun', John Howard
James searches for a perfect, discreet place in the sun on the western coast of Italy. "Whenever the road turned inland he regretted not having bought a map of his own and making sure of his route to Lamolfo. But the strong sunlight and warm breeze ruffling his hair brightened his mood and strengthened his resolve to continue driving by instinct."

'Wandering Paths', John Howard
A man takes a sweaty slice-of-life nature walk in Transylvania, experiencing a brooding sense of menacing déjà vécu. "Possibly he had been unconsciously recalling photos and brochures that his wife must have shown him."

'A Lantern for Carpathia', Mark Valentine
A scholar studying "the cigarette in Europe" pays a nighttime visit "to the last vestige of the Carpathian Republic."

'The High Places', John Howard
The artist, in his work, preserves a way of looking at the material world. But what if depiction also impacted the subject itself?

'The Fall of Ashes', Mark Valentine
A claustrophobic story about defeated and politically demobilized individuals in an unnamed police state. "What was the cause of the rain of ashes? At first it was clear the authorities must be responsible. Undoubtedly this was some unplanned side-effect of the Two Year Reconstruction that had been announced. It was soon said they had built a book-burning furnace upon the edges of the city and its chimneys were responsible for the grey showers."

'Cabaret Zoltaire', Mark Valentine
A stream-of-consciousness freshet of coffee-house enthusiasm for the old verbal postures assumed by the Dadaists.

'The Waltz of Masks', John Howard
One of the strong stories in the collection: flight from class war in early 1930s Vienna by an old man willing himself back into to the days of the Austro-Hungarian empire. "I now know that we danced on the edge of a precipice. Our world was glorious but empty, and behind the graceful poise and beauty of our lives there was nothing but impending doom. Everything came to an end so shortly afterwards. I remember the assassinations and the ultimatum; no-one believed that it would be accepted, but when most of it was, the sense of relief. . . . Going to war was madness. We were not ready. We had not been ready for decades."

'The Second Percussionist', Mark Valentine
"Another sure way to be inconspicuous is to allow yourself, just a little, to become an object of fun. I tell them all I am composing a sea concerto. Who ever heard of a second percussionist composing anything?" A minor symphonic musician thrives as a socially invisible man.

'A Gift for the Emperor', John Howard
Wilhelm II's gifts invariably precede his demands. A married couple are perplexed by the gift, and mystified by the emperor's demand.

'An Officer of the Reserve', Mark Valentine
An official in the Moravian province of the Austro-Hungarian Empire is shocked to discover his own imperial loyalty emerging unbidden.

I read the first third of Secret Europe last Sunday, and thought I could finish it in two days. (I've often thought the same thing about a plate of schaumrollen). But this ambrosial book is best read in small servings; I slowed down to two or three stories per day, none of them read back-to-back. (I also interspersed the stories with rest breaks to read "The Absent-Minded Coterie" and "The Mystery of the Five Hundred Diamonds" by Robert Barr.)

Though published by Tartarus Press, do not look for spirits here, or Pan.

Every story, however, is beautifully freighted with an uncanny historicity. Readers familiar with the region and period will bring a deeper context to their enjoyment. 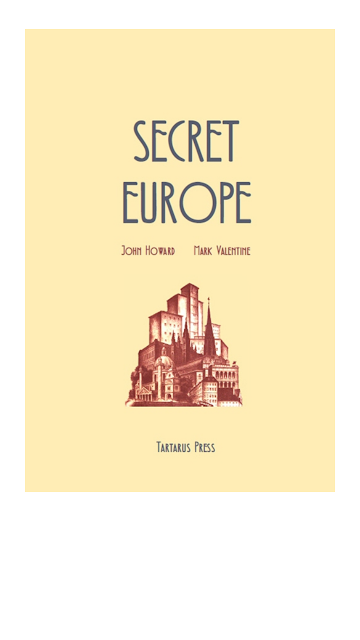 Posted by Jay Rothermel at 6:14 AM