The green stone that ate Willy: The Web of Easter Island and Dead Titans, Waken! by Donald Wandrei 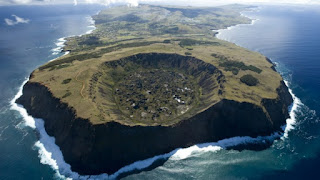 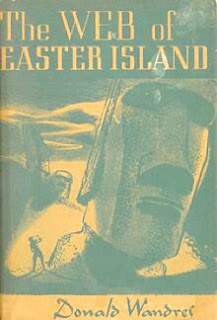 The Web of Easter Island is a 1948 revision by Donald Wandrei of his unpublished 1932 novel Dead Titans, Waken!In the last two weeks I have read both novels. They are the first novels by Wandrei I have read. (I also read His collected weird fiction, Don't Dream.)The revisions from the 1932 book to the 1948 book are not major changes to the story. Easter Island has reduced Wandrei's orgy of pseudo-scientic jargon on display in Titans. This 1932 passage:....I wish I could grasp the abstract principles of mathematics that are now current, and which are as far beyond Einstein as he was beyond Euclid. An understanding of them might go a long way toward a clarification of the farrago. According to this system, the geometry of solids is based upon three tangibles: length, breadth, and thickness; and two intangibles: time, and omega; the omega representing a fourth dimension which is the totality of the universe, obtained by the triunarization of infinite space, this hypothesis being that all matter is both infinite and eternal because its line of direction is so curved that it reverses upon itself and can be conceived as elliptical. Thus comets follow ellipses, planets have ovoidal orbits, straight lines become reversibles at omega, and an expanding universe such as Jeans and Eddington postulated in my period would ultimately be a contracting universe. Furthermore, relativity is integral to this mathematics. There is no specific, ultimate, fixed absolute in any of the tangibles or intangibles. Each bears a fluctuable relation to the four other elements of the mathematics, and to any observer at any point in the universe, observer, point, and universe themselves being fluctuant. “Among the corollaries of this mathematics is the assertion that the three tangibles expand to a lesser organism than man, but the two intangibles contract; and that, to a higher organism than man, the three tangibles contract, while the two tangibles expand. Thus, to a little ephemeris fly, length, breadth, and thickness are enormities; but time and omega are brevities, for its entire existence is consummated in fulness in a single day; but to a hypothetical super-organism, length, breadth, and thickness would be trifles, while time and omega would be concepts of mind-surprassing magnitude. “Another corollary is that, if any consciousness could be transferred to the condition of a lesser or greater organism, its perspective and relationships likewise would violently change. is now reduced to this 1948 passage:The new mathematics, however, was so abstract, so far advanced even from the level of Einstein, Whitehead and Russell, that he realized he would never comprehend it. It was based on five dimensions; to length, breadth, thickness, and time, a fifth dimension called Ru had been added. Graham not only did not learn the laws of the five-dimensional mathematics; he did not succeed in obtaining more than a vague notion about the dimension called Ru. For Ru, as a tool for measurement like the other dimensions, differed from them in being of itself measureless; it was a fluctuation, a changeable, representing the continuous mutability of observer, object, and universe each in relation to the other. Farther than this Graham could not follow; decades of study might provide him the background for understanding, but he did not even have days remaining, if his fears were correct.The character Dan Farrell appears in both novels, though to more dramatic advantage in Easter Island.
When Wandrei's protagonist Carter E. Graham is injured during a trainwreck, Farrell swipes his valise and flees the scene. (In Titans Farrell is a thief on the run. In Easter Island, a wife-murderer.)
In Titans, Farrell boards a clipped flying to New York. In Easter Island, he boards a passenger ship. On each trip, he opens Graham's valise and finds the pan-dimensional idol Graham discovered in the Devil's Graveyard in Isling. Farrell has an erotic encounter in each version. In Titans, it is with a stewardess.  In Easter Island, it is with a fellow passanger; ironically for Farrell, he reminds her of the husband she murdered a year before.At which point, Wandrei disposes of Farrell. Which is too bad; he is a much more compelling make protagonist than Graham. We could have had a Tom Ripley versus the Titans were Wandrei a cannier and more patient writer.Carter E. Graham is a prig. In the course of Easter Island he gets two colleagues killed, which hardly phases him. Waking in hospital after the train wreck that nearly kills him, he has this interaction:....He estimated he had been conscious for at least fifteen minutes, since it seemed like hours. He raised himself cautiously again to see if he could reach the service-bell without another wave of nausea. He managed to press the button, though fiery lancers dueled in his brain. After a few minutes a nurse entered. She possessed a plain, cheerful face, and tawny blonde hair the color of taffy.Nature had assembled her lavishly. She bore an impressive superstructure and an equally prominent extension in the opposite direction; assets and attributes that overbalanced her, coming and going, but not without attraction of a massive kind. Graham mused, “Outstanding examples of developments that are both steatopygous and mammosus.” “I beg your pardon?” “The Greeks and the Romans had words. The Anglo-Saxon equivalents, while pungent, are less esthetic.” The nurse looked blank. “Did you ring?”-“No, the bell did,” he responded with a trace of brusqueness. He hated superfluous questions, especially those of feminine origin. She smiled like a tooth-paste ad at his unexpected reply and retorted, “If I were to answer in kind, I’d say that Sir Warren left a piece of his own mind, such as it is, in you.”“Sir Warren?” “Yes, the surgeon, Gifford. He operated on you yesterday for skull fracture and concussion of the brain. A minor operation, of course.”One chapter in The Web of Easter Island, recapitulating part of "The Call of Cthulhu," finds Graham collating media reports of mass outbreaks of global insanity as the Titans' advent approaches.


*Wandrei did not publish Dead Titans, Waken! in his lifetime, and he showed good judgment in not doing so. It is uneven, to speak politely. Wandrei whipsaws chapter by chapter from surprising strength and concision to self-indulgent post-Lovecraft Lovecraftian rhetorical overkill. The Web of Easter Island reduces excessive quotation from Graham's diary and increases the use of third-person narration. This is particularly seen in the last chapter, when Graham finds he has been catapulted off the Easter Island of his own day and into year one million, five hundred thousand. To his horror, Graham quickly realizes the techno-utopia he discovers is doomed.....All over the world, there had come a sharp rise in the numbers resorting to the Towers of Departure. The world capital, the largest of all communities, a city with a population of 30,000 in the Andean approaches of what had once been Brazil, reported forty-one exits in one day compared to its statistical average of nineteen one-hundredths, or .19, daily. Other localities showed similar increases. Graham did not understand many passages in the council spokesman’s report, for he had only a rudimentary knowledge of the new language. He did, however, catch an allusion to a phenomenon taking place over ocean waters; if the location was given, he missed that detail also. But he did not need it; only one small area of earth could produce a phenomenon of a kind that would substantiate his fears. He waited until the spokesman ended her official report, when the unitel automatically reverted to individual control. He then closed the contact and began moving the selector needle toward the south Pacific. As the needle moved, he glanced at the screen from time to time; and in the progress of the needle, he caught glimpses of many aspects of this civilization, quite by chance: a food specialist preparing nutrient solutions; startling paintings in an art gallery; a machine scooping up dirt and transforming it to tunics, wire, and energy; a technician inseminating a chosen mother by the insertion of an analyzed and prepared sperm on a sterile injector; two children playing an intellectual game by rearranging the yellow, blue, and red cubes in a three-dimensional suspension; a clump of strange white trees, with branches drooping like the strands of an inverted mop, that lifted their roots and walked away from a region of drought toward a mountain lake. The selector needle left the coast of Chile; and now the screen showed only the vacant waters of the Pacific. Graham remembered the latitude and longitude of Easter Island, and brought the selector to that area. He saw Easter Island again, though its highest peak lay a hundred yards below the ocean surface. He saw it, for the vast column of alien energy had returned, driving the waters away. And in the crater of Rano Raraku, at the base of the implacable pillar, squatted the Keeper of the Seal, the green little statuette in a fury of mutation, pulsing and rioting through its cycle of expansions beyond the cosmos and contractions from other-time and other-space. Graham looked at the screen with a dullness of despair. By the state of the pillar, he knew that at least another day would pass before the link was completely open for the titans to enter. He could, if he wished, fly to Easter Island and challenge the Keeper again. He visualized himself engulfed once more by that abysmal force, to be hurled farther and farther onward in leaps of one and one-half million years, until he receded into conjectural vistas of vanishing time. For the measureless column, like the corridor at Stonehenge, was a time-trap, though of different kind; and unless the inventors of it, from their abode in the hyper-time and the hyper-space above and beyond the universe, chose to alter its function and the function of the Keeper, Graham could for ever take the action that would defer the completion of the link. And for ever and forever he would be projected, in steps of one and one-half million years, intervals of absence and return, sliding down the utmost recesses of the future....

The Web of Easter Island, though superior to Dead Titans, Waken!, is not adequate to the promise of its material and scope. Quotations I have selected are from the novel's strongest moments.But by far the best is the story embedded in chapter one. After several pages recounting the benighted history of the village of Isling, about ten miles from Stonehenge, Wandrei gives us a potent tale, graphic and pungent as folklore: 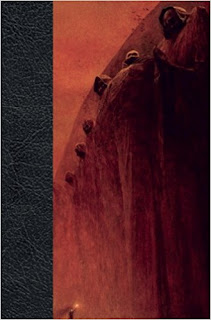 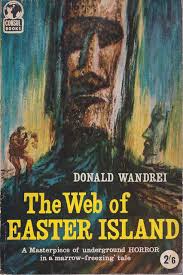 Posted by Jay Rothermel at 9:22 AM