Fully connected: a review of Before Crazytown by Duane Pesice

Before Crazytown by Duane Pesice is a mirthful and delicately poised pamphlet-sized collection of anecdotes, slices of life, and short stories.

Readers of this blog over the last half year realize that I prize droll stories over the splattery and gloomily gratuitous.

Before Crazytown is the perfect booklet for a reader like me.

The stories sometimes have the cold-blood mirth of Saki, at other times the humanism of Vonnegut. The majority speak in an arresting style cross-bred out of deadpan Burroughs and jabbery Lovecraft.

I will touch on only a few of the fourteen stories, ones that really connected with me.

....Mind you, a small shoggoth is an excellent pet. They're quiet, friendly if you don't mind the smell and the trails of sticky mucus they leave everywhere, and will eat anything. The problem is, they grow as they eat, and they don't stop. They are from the universe before this one and don't obey the same laws of physics as common terrestrial creatures. The conservation of mass and the ratio of mass to energy don't mean a thing to them.

I learned that very early, and stopped feeding him. I installed a small attic fan and did a little ductwork to allow the smell to escape into the outer air, through several thousand layers of charcoal furnace filters. That helped some, but he ate his own refuse and continued to grow.

Shoggoth poo is the best fertilizer in the universe. That's the sole saving grace of the whole enterprise. I found that out by paging through the Necronomicon, trying to find a solution to my dilemma, namely, how do you get rid of a pet shoggoth? It isn't like the ASPCA is gonna come and get it-it isn't even an animal, a vegetable, or a mineral. I dunno what exactly it is, but man, does it ever shit. And it shits in balls, like a rabbit.

As a reader I would love to read more of this narrator's adventures in the shoggoth manure business.  Can you imagine, after the get-rich-quick mania, having to deal with whatever crops thrived on such fertilizer?

One of my favorite plots is the "biter bit."

In this story, peeping tom and internet chatroom creep Dexter finds the tables turned when he tried his usual date-rape assault on a patchouli-scented Earth mother type.

Kalia had lost patience with this game. "You really don't get it. If you hadn't done that, you could have walked away..."

"Huh? What are you talking about? I'm gonna fuck the legs right off of you so you can't get away."

She backed away quickly, breaking his grip again, then came in and whacked him hard enough in the side of his head to make him see stars. She hit him again, harder, and he crumpled to his knees. She backed away as he got up again.

"To think that I actually sorta liked you for a while there," she said, shaking her head. "Your naivete was charming at first..."

"We're not having this conversation." He shook his head. "No sir. You hit good for a girl. Gonna fuck you up for that." He grinned wolfishly, and took a step forward, reaching for her, but couldn't complete the action. "What the fuck?" he cried.

The pounding in his head and in his groin was unbearable. He thought he could hear it echoed below him, but that was crazy. This place didn't have a basement. There was like a choir too, and pipes of some kind. And crazy laughter, like they were in another room but still in the room with them, too.

Two of the tendrils of the hanging plant had fastened around his legs. The limbs of the bonsai forgot they were dwarf and grasped him, held him tight. The pitcher plants opened in silent laughter.

"Parchment" is one of the major tales in Before Crazytown. It employs a light touch in dealing with precarious temp jobs that unfold in unexpected, seductive, and deadly ways. It was produced brilliantly for audio here.

Throughtout my twenties I took city buses everywhere I had to go. One spring night in 1989, I missed the last bus home from a telemarketing job, and had to walk from east-€side to campus across Columbus, Ohio to get home.

I can readily identify with the main character in "The Last Bus."

There was a bike in the rack on the front of the bus. Rodrigo noticed it as he boarded, and lusted after it. Shiny and new, silver spokes gleaming, blue pain, 15 or 18 speeds.

“Man, glad I made it,” he said to the driver. “No more buses tonight. It’d suck to be stranded.”

The driver nodded and pulled the bus away from the curb. Rodrigo moved on down the aisle.

He took a seat midway between the reeking drunk behind the driver's area and the rayon-clad working-women near the side door, and thought about how easy things would be with a bike.

"Yeah man," he said to himself under his breath. "That's 35 extra a month. I could eat lunch with that money. No more monthly bus pass."

The bus passed by a Whataburger and his stomach rumbled in recognition of the smell coing in the window. He hadn't eaten since the previous evening.

Two senior citizens got on at the next stop.

“I wonder who’s bike it is?” he thought, scanning the other passengers surreptitiously.

A couple of wannabe 'bangers in the back, headphones on, jamming to the clubfooted beats of hip-hop, the waitresses and clerks and cashiers, some bluehairs out too late.

Another banger got on, sat down with the others, exchanging mysterious gestures.

Rodrigo gazed at his reflection in the side window. Too much frown, hairline heading for the border, the face of a working stiff. Life hadn't been kind....

While "The Last Bus" really connects with me, I believe "Ghoul Picnic" is the strongest and most poignant story in Before Crazytown.

A delicate and somber amalgam of science fiction and  horror, it tells the story of an indigenous people whose traditions, culture, and folkways are destroyed in a single night when they are beset by foreign interlopers.

....The machine people departed also, and we four remained standing at the peak of the mountain.

Illivant could not understand what had occurred, other than the fact that the Night People could not enter the caverns that had been their home, and were to guard against intruders from within. Illivant's head hurt from the unfamiliar doings. Illivant wailed from the pain, and from the weight of the burden that had been placed upon him, to remain outside and guard the doorway of his former home. Graven and Skowl were locked in an embrace, weeping and gnashing their teeth. "The Folk are lost to us now," sobbed Graven. "The old ways are not our ways."

Ghost alone stood silent and thoughtful. "We should not tarry," he whispered, and led us down the mountain toward the Gateway of Mordiggian.

Arka and Illandra had unwrapped the leaves and were building a clumsy structure for the fire. The pups were bringing such wood as they could carry. Stoll nodded as we approached.

Pesice gives us no moralizing. Anyone reading the story will feel its historical associations with what happened to the first peoples of the Americas. Pesice uses tropes of the horror genre to perfectly arrest the reader's conscience.

I've only touched on a few of the treasures in Before Crazytown. I'll leave it to fellow readers to discover the rest. 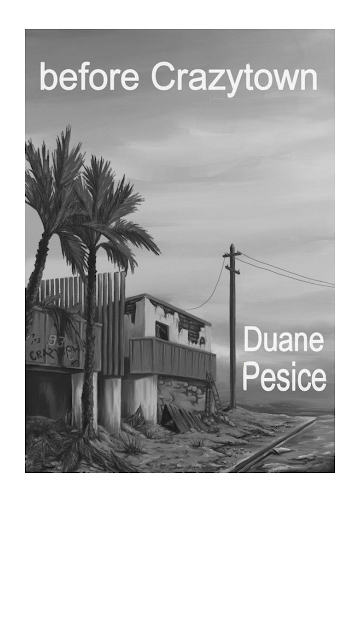 Posted by Jay Rothermel at 3:57 PM