A few more underlinings from last week's reading of selected tales from The Complete Stories of Evelyn Waugh. 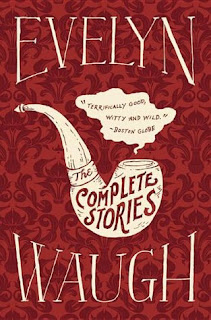 AN ENGLISHMAN’S HOME
....the Hornbeams at the Old Mill were a childless, middle-aged couple who devoted themselves to craftsmanship. Mr. Hornbeam senior was a genuine, commercial potter in Staffordshire; he supported them reluctantly and rather exiguously, but this backing of unearned quarterly cheques placed them definitely in the upper strata of local society. Mrs. Hornbeam attended church and Mr. Hornbeam was quite knowledgeable about vegetables. In fact, had they preferred a tennis court to their herb garden, and had Mr. Hornbeam possessed an evening-suit, they might easily have mixed with their neighbours on terms of ostensible equality. At the time of the Peace Ballot, Mrs. Hornbeam had canvassed every cottage in bicycling distance, but she eschewed the Women's Institute, and in Lady Peabury's opinion failed to pull her weight in the village. Mr. Metcalfe thought Mr. Hornbeam Bohemian, and Mr. Hornbeam thought Mr. Metcalfe Philistine. Colonel Hodge had fallen out with them some time back, on a question relating to his Airedale, and cut them year in, year out, three or four times a day.
....Nervous gloom descended on the Old Mill. There was no explosion of wrath as there had been at the Manor; no moral condemnation as at the House; no call to action as had come from the Hall. Hopeless sorrow reigned unrelieved. Mrs. Hornbeam's pottery went to pieces. Mr. Hornbeam sat listless at the loom. It was their working hour; they sat at opposite ends of the raftered granary. Often, on other afternoons, they sang to one another catches and refrains of folk music as their busy fingers muddled with the clay and the shuttles. Today they sat in silence each, according to a Japanese mystical practice, attempting to drive the new peril into the World of Unbeing. It had worked well enough with Colonel Hodge and the Airedale, with the Abyssinian War, and with Mr. Hornbeam senior's yearly visit, but by sunset the new peril remained obstinately concrete.
Mrs. Hornbeam set their simple meal of milk, raisins, and raw turnip; Mr. Hornbeam turned away from his elm platter. "There is no place for the Artist in the Modern World," he said. "We ask nothing of their brutish civilization except to be left alone, to be given one little corner of land, an inch or two of sky where we can live at peace and occupy ourselves with making seemly and beautiful things. You wouldn't think it was too much to ask. We give them the entire globe for their machines. But it is not enough. They have to hunt us out and harry us. They know that as long as there is one spot of loveliness and decency left it is a standing reproach to them."
It was growing dark; Mrs. Hornbeam struck a flint and lit the rush lights. She wandered to the harp and plucked a few poignant notes....
....Lady Peabury was in the morning room reading a novel; early training gave a guilty spice to this recreation, for she had been brought up to believe that to read a novel before luncheon was one of the gravest sins it was possible for a gentlewoman to commit.

MY FATHER'S HOUSE:  Chapter One of the unfinished novel Work Suspended
....It was this postman who brought the news of my father's death in a letter from my Uncle Andrew, his brother.
My father, it appeared, had been knocked down by a motor-car more than a week ago and had died without regaining consciousness. I was his only child and, with the exception of my uncle, his only near relative. "All arrangements" had been made. The funeral was taking place that day. "In spite of your father's opinions, in the absence of any formal instructions to the contrary," my Uncle Andrew wrote, "your Aunt and I thought it best to have a religious ceremony of an unostentatious kind."
"He might have telegraphed," I thought; and then, later, "Why should he have?" There was no question of my having been able to see my father before he died; participation in a "religious ceremony of an unostentatious kind" was neither in my line nor my father's; nor, to do him justice, in my Uncle Andrew's. It would satisfy the Jellabys.
With regard to the Jellabys my father always avowed a ruthlessness which he was far from practising; he would in fact put himself to considerable inconvenience to accommodate them, but in principle he abhorred any suggestion of discretion or solicitude. It was his belief that no one but himself dealt properly with servants. Two attitudes drove him to equal fury: what he called the "pas-devant tomfoolery" of his childhood the precept that scandal and the mention of exact sums of money should be hushed in their presenceâ€”or the more recent idea that their quarters should be prettily decorated and themselves given opportunity for cultural development. "Jellaby has been with me twenty years," he would say, "and is fully cognisant of the facts of life. He and Mrs. Jellaby know my income to the nearest shilling and they know the full history of everyone who comes to this house. I pay them abominably and they supplement their wages by cooking the books. Servants prefer it that way. It preserves their independence and self-respect. The Jellabys eat continually, sleep with the windows shut, go to church every Sunday morning and to chapel in the evening, and entertain surreptitiously at my expense whenever I am out of the house. Jellaby's a teetotaller; Mrs. Jellaby takes the port." He rang the bell whenever he wanted anything fetched from upstairs and sat as long as he wanted over his wine. "Poor old Armstrong," he used to say of a fellow Academician, "lives like a Hottentot. He keeps a lot of twittering women like waitresses in a railway station buffet. After the first glass of port they open the dining-room door and stick their heads in. After the second glass they do it again. Then instead of throwing something at them, Armstrong says, â€˜I think they want to clear' and we have to move out." But he had a warm affection for the Jellabys, and I believe it was largely on Mrs. Jellaby's account that he allowed himself to be put down for the Academy. They, in their turn, served him faithfully. It would have been a cruel betrayal to deny them a funeral service and I am sure my father had them in mind when he omitted any provision against it in his will. He was an exact man who would not have forgotten a point of that kind. On the other hand, he was a dogmatic atheist of the old-fashioned cast and would not have set anything down which might be construed as apostasy. He had left it to my Uncle Andrew's tact. No doubt, too, it was part of my uncle's tact to save me the embarrassment of being present.

BASIL SEAL RIDES AGAIN
....It may one day occur to a pioneer of therapeutics that most of those who are willing to pay fifty pounds a week to be deprived of food and wine, seek only suffering and that they could be cheaply accommodated in rat-ridden dungeons. At present the profits of the many thriving institutions which cater for the ascetic are depleted by the maintenance of neat lawns and shrubberies and, inside, of the furniture of a private house and apparatus resembling that of a hospital.
Basil and Angela could not immediately secure rooms at the sanatorium recommended by Molly Pastmaster. There was a waiting list of people suffering from every variety of infirmity. Finally they frankly outbid rival sufferers. A man whose obesity threatened the collapse of his ankles, and a woman raging with hallucinations were informed that their bookings were defective, and on a warm afternoon Basil and Angela drove down to take possession of their rooms.
There was a resident physician at this most accommodating house. He interviewed each patient on arrival and ostensibly considered individual needs.
He saw Angela first. Basil sat stolidly in an outer room, his hands on the head of his cane, gazing blankly before him.
When at length he was admitted, he stated his needs. The doctor did not attempt any physical investigation. It was a plain case.
"To refrain from technical language you complain of speechlessness, a sense of heat and strangulation, dizziness and subsequent trembling?" said this man of science.
"I feel I'm going to burst," said Basil.
"Exactly. And these symptoms only occur when you meet young men?"
"Hairy young men especially."
"Ah."
"Young puppies."
"And with puppies too? That is very significant. How do you react to kittens?"
"I mean the young men are puppies."
"Ah. And are you fond of puppies, Mr. Seal?"
"Reasonably."
"Ah." The man of science studied the paper on his desk. "Have you always been conscious of this preference for your own sex?"
"I'm not conscious of it now."
"You are fifty-eight years and ten months. That is often a crucial age, one of change, when repressed and unsuspected inclinations emerge and take control. I should strongly recommend your putting yourself under a psychoanalyst. We do not give treatment of that kind here."
"I just want to be cured of feeling I'm going to burst."
"I've no doubt our rÃ©gime will relieve the symptoms. You will not find many young men here to disturb you. Our patients are mostly mature women. There is a markedly virile young physical training instructor. His hair is quite short but you had better keep away from the gym. Ah, I see from your paper that you are handicapped by war-wounds. I will take out all physical exercise from your timetable and substitute extra periods of manipulation by one of the female staff. Here is your diet sheet. You will notice that for the first forty-eight hours you are restricted to turnip juice. At the end of that period you embark on the carrots. At the end of the fortnight, if all goes well, we will have you on raw eggs and barley. Don't hesitate to come and see me again if you have any problem to discuss."
The sleeping quarters of male and female inmates were separated by the length of the house. Basil found Angela in the drawing room. They compared their diet sheets.
"Rum that it should be exactly the same treatment for insomnia and apoplexy."
"That booby thought I was a pansy."

SCOT-KING'S MODERN EUROPE
....out of 450 boys scarcely 50 read Greek. Scott-King had watched his classical colleagues fall away one by one, some to rural rectories, some to the British Council and the BBC, to be replaced by physicists and economists from the provincial universities, until now, instead of inhabiting solely the....

Posted by Jay Rothermel at 6:04 AM