The unnameable history of the United States: The Unnameable by H.P. Lovecraft

Lovecraft's 1925 short story "The Unnameable" has always been a touchstone for me. As well as being an exposition on aesthetics disguised as a short story, it also illuminates an aspect of the prehistory of the U.S.; i.e. the "matter of North America."

In this it was some similarities to Hawthorne's unrivaled "Young Goodman Brown" (1835): the "true" underside of colonial life in New England.

Only 4 July I am reminded of many things, not all wholesome or praiseworthy, in the history of this, the world's final empire.

But we are not cringing moralizers.

I'll let that human shard of the shattered New English bourgeoisie have the final say:

....My tale had been called The Attic Window, and appeared in the January, 1922, issue of Whispers. In a good many places, especially the South and the Pacific coast, they took the magazines off the stands at the complaints of silly milk-sops; but New England didn't get the thrill and merely shrugged its shoulders at my extravagance. The thing, it was averred, was biologically impossible to start with; merely another of those crazy country mutterings which Cotton Mather had been gullible enough to dump into his chaotic Magnalia Christi Americana, and so poorly authenticated that even he had not ventured to name the locality where the horror occurred. And as to the way I amplified the bare jotting of the old mystic—that was quite impossible, and characteristic of a flighty and notional scribbler! Mather had indeed told of the thing as being born, but nobody but a cheap sensationalist would think of having it grow up, look into people's windows at night, and be hidden in the attic of a house, in flesh and in spirit, till someone saw it at the window centuries later and couldn't describe what it was that turned his hair gray. All this was flagrant trashiness, and my friend Manton was not slow to insist on that fact. Then I told him what I had found in an old diary kept between 1706 and 1723, unearthed among family papers not a mile from where we were sitting; that, and the certain reality of the scars on my ancestor's chest and back which the diary described. I told him, too, of the fears of others in that region, and how they were whispered down for generations; and how no mythical madness came to the boy who in 1793 entered an abandoned house to examine certain traces suspected to be there.

It had been an eldritch thing—no wonder sensitive students shudder at the Puritan age in Massachusetts. So little is known of what went on beneath the surface—so little, yet such a ghastly festering as it bubbles up putrescently in occasional ghoulish glimpses. The witchcraft terror is a horrible ray of light on what was stewing in men's crushed brains, but even that is a trifle. There was no beauty; no freedom—we can see that from the architectural and household remains, and the poisonous sermons of the cramped divines. And inside that rusted iron straitjacket lurked gibbering hideousness, perversion, and diabolism. Here, truly, was the apotheosis of The Unnamable.

Cotton Mather, in that demoniac sixth book which no one should read after dark, minced no words as he flung forth his anathema. Stern as a Jewish prophet, and laconically un-amazed as none since his day could be, he told of the beast that had brought forth what was more than beast but less than man—the thing with the blemished eye—and of the screaming drunken wretch that hanged for having such an eye. This much he baldly told, yet without a hint of what came after. Perhaps he did not know, or perhaps he knew and did not dare to tell. Others knew, but did not dare to tell—there is no public hint of why they whispered about the lock on the door to the attic stairs in the house of a childless, broken, embittered old man who had put up a blank slate slab by an avoided grave, although one may trace enough evasive legends to curdle the thinnest blood.

It is all in that ancestral diary I found; all the hushed innuendoes and furtive tales of things with a blemished eye seen at windows in the night or in deserted meadows near the woods. Something had caught my ancestor on a dark valley road, leaving him with marks of horns on his chest and of apelike claws on his back; and when they looked for prints in the trampled dust they found the mixed marks of split hooves and vaguely anthropoid paws. Once a post-rider said he saw an old man chasing and calling to a frightful loping, nameless thing on Meadow Hill in the thinly moonlit hours before dawn, and many believed him. Certainly, there was strange talk one night in 1710 when the childless, broken old man was buried in the crypt behind his own house in sight of the blank slate slab. They never unlocked that attic door, but left the whole house as it was, dreaded and deserted. When noises came from it, they whispered and shivered; and hoped that the lock on that attic door was strong. Then they stopped hoping when the horror occurred at the parsonage, leaving not a soul alive or in one piece. With the years the legends take on a spectral character—I suppose the thing, if it was a living thing, must have died. The memory had lingered hideously—all the more hideous because it was so secret.

During this narration my friend Manton had become very silent, and I saw that my words had impressed him. He did not laugh as I paused, but asked quite seriously about the boy who went mad in 1793, and who had presumably been the hero of my fiction. I told him why the boy had gone to that shunned, deserted house, and remarked that he ought to be interested, since he believed that windows latent images of those who had sat at them. The boy had gone to look at the windows of that horrible attic, because of tales of things seen behind them, and had come back screaming maniacally.

Manton remained thoughtful as I said this, but gradually reverted to his analytical mood. He granted for the sake of argument that some unnatural monster had really existed, but reminded me that even the most morbid perversion of nature need not be unnamable or scientifically indescribable. I admired his clearness and persistence, and added some further revelations I had collected among the old people. Those later spectral legends, I made plain, related to monstrous apparitions more frightful than anything organic could be; apparitions of gigantic bestial forms sometimes visible and sometimes only tangible, which floated about on moonless nights and haunted the old house, the crypt behind it, and the grave where a sapling had sprouted beside an illegible slab. Whether or not such apparitions had ever gored or smothered people to death, as told in uncorroborated traditions, they had produced a strong and consistent impression; and were yet darkly feared by very aged natives, though largely forgotten by the last two generations—perhaps dying for lack of being thought about. Moreover, so far as esthetic theory was involved, if the psychic emanations of human creatures be grotesque distortions, what coherent representation could express or portray so gibbous and infamous a nebulosity as the specter of a malign, chaotic perversion, itself a morbid blasphemy against nature? Molded by the dead brain of a hybrid nightmare, would not such a vaporous terror constitute in all loathsome truth the exquisitely, the shriekingly unnamable?

The hour must now have grown very late. A singularly noiseless bat brushed by me, and I believe it touched Manton also, for although I could not see him I felt him raise his arm. Presently he spoke.

"But is that house with the attic window still standing and deserted?"

"And did you find anything there—in the attic or anywhere else?" 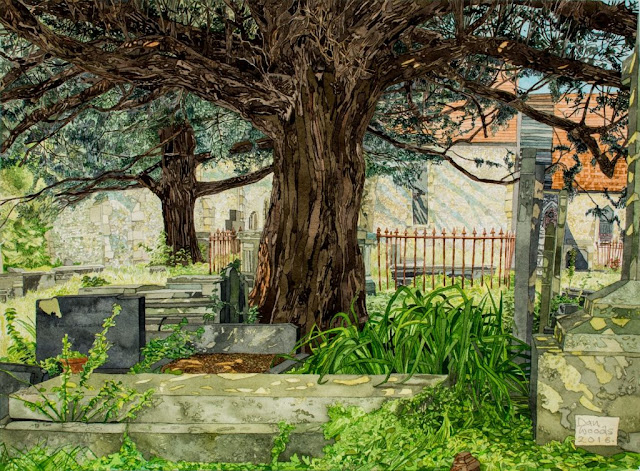 Posted by Jay Rothermel at 1:30 PM