The ship sails on: A Dip in the Pool by Roald Dahl

Like Saki, Dahl is slick, clever, and pitiless in his stories. This is a quality always in short supply in the horror genre.

Mr. Botibol is sailing home to New York. He obsesses over winning a lucrative shipboard pool for the liner's daily progress.

....When the eating was finished and the coffee had been served, Mr Botibol, who had been unusually grave and thoughtful since the rolling started, suddenly stood up and carried his cup of coffee around to Mrs Renshaw’s vacant place, next to the purser. He seated himself in her chair, then immediately leaned over and began to whisper urgently in the purser’s ear.

‘Excuse me,’ he said, ‘but could you tell me something, please?’ The purser, small and fat and red, bent forward to listen.

‘What’s the trouble, Mr Botibol?’ ‘What I want to know is this.’ The man’s face was anxious and the purser was watching it.

‘What I want to know is will the captain already have made his estimate on the day’s run – you know, for the auction pool? I mean before it began to get rough like this?’

The purser, who had prepared himself to receive a personal confidence, smiled and leaned back in his seat to relax his full belly.

‘I should say so – yes,’ he answered. He didn’t bother to whisper his reply, although automatically he lowered his voice, as one does when answering a whisper.

....‘Do you think the captain knew there was bad weather commg today?’

‘I couldn’t tell you,’ the purser replied. He was looking into the small black eyes of the other man, seeing the two single little sparks of excitement dancing in their centres. ‘I really couldn’t tell you, Mr Botibol. I wouldn’t know.’

‘If this gets any worse it might be worth buying some of the low numbers. What do you think?’ The whispering was more urgent, more anxious now.

....Down in the smoking-room people were already gathering for the auction. They were grouping themselves politely around the various tables, the men a little stiff in their dinner jackets, a little pink and overshaved and stiff beside their cool white-armed women. Mr Botibol took a chair close to the auctioneer’s table. He crossed his legs, folded his arms, and settled himself in his seat with the rather desperate air of a man who has made a tremendous decision and refuses to be frightened.

The pool, he was telling himself, would probable be around seven thousand dollars. That was almost exactly what it had been the last two days with the numbers selling for between three and four hundred apiece. Being a British ship they did it in pounds, but he liked to do his thinking in his own currency. Seven thousand dollars was plenty of money.

My goodness, yes! And what he would do he would get them to pay him in hundred-dollar bills and he would take it ashore in the inside pocket of his jacket. No problem there. And right away, yes right away, he would buy a Lincoln convertible. He would pick it up on the way from the ship and drive it home just for the pleasure of seeing Ethel’s face when she came out the front door and looked at it.

Wouldn’t that be something, to see Ethel’s face when he glided up to the door in a brand-new pale-green Lincoln convertible! Hello, Ethel, honey, he would say, speaking very casual. I just thought I’d get you a little present. I saw it in the window as I went by, so I thought of you and how you were always wanting one. You like it, honey?

Mr. Botibol buys a low number in the pool, calculating that bad weather will slow the liner.

....When Mr Botibol awoke the next morning he lay quite still for several minutes with his eyes shut, listening for the sound of the gale, waiting for the roll of the ship. There was no sound of any gale and the ship was not rolling. He jumped up and peered out of the porthole. The sea – Oh Jesus God – was smooth as glass, the

great ship was moving through it fast, obviously making up for time lost during the night. Mr Botibol turned away and sat slowly down on the edge of his bunk. A fine electricity of fear was beginning to prickle under the skin of his stomach. He hadn’t a hope now. One of the higher numbers was certain to win it after this.

What, for example, would Ethel say? It was simply not possible to tell her that he had spent almost all of their two years’ savings on a ticket in the ship’s pool. Nor was it possible to keep the matter secret. To do that he would have to tell her to stop drawing cheques. And what about the monthly instalments on the television set and the Encyclopaedia Britannica ?

Already he could see the anger and contempt in the woman’s eyes, the blue becoming grey and the eyes themselves narrowing as they always did when there was anger in them....

Mr. Botibol decides to jump overboard, bringing the ship's progress to a halt. He picks out an old woman standing by a deck rail to sound the alarm.

Then he hit the water and went under.

When the first shout for help sounded, the woman who was leaning on the rail started up and gave a little jump of surprise. She looked around quickly and saw sailing past her through the air this small man dressed in white shorts and tennis shoes, spreadeagled and shouting as he

went. For a moment she looked as though she weren’t quite sure what she ought to do: throw a lifebelt, run away and give the alarm, or simply turn and yell. She drew back a pace from the rail and swung half around facing up to the bridge, and for this brief moment she remained motionless, tense, undecided.

Then almost at once she seemed to relax, and she leaned forward far over the rail, staring at the water where it was turbulent in the ship’s wake. Soon a tiny round black head appeared in the foam, an arm was raised above it, once, twice, vigorously waving, and a small faraway voice was heard calling something that was difficult to understand.

The woman leaned still farther over the rail, trying to keep the little bobbing black speck in sight, but soon, so very soon, it was such a long way away that she couldn’t even be sure it was there at all.

After a while another woman came out on deck. This one was bony and angular, and she wore horn-rimmed spectacles. She spotted the first woman and walked over to her, treading the deck in the deliberate, military fashion of all spinsters.

‘So there you are,’ she said. The woman with the fat ankles turned and looked at her, but said nothing. ‘I’ve been searching for you,’ the bony one continued. ‘Searching all over.’

‘It’s very odd,’ the woman with the fat ankles said. ‘A man dived

overboard just now, with his clothes on.’

And, as the saying goes, the ship sailed on.

A cropped TV version can be viewed here. 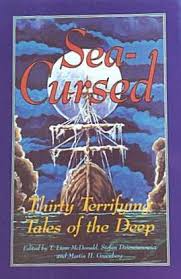 Posted by Jay Rothermel at 1:01 PM