Get a new President: Bob Hauk versus Snake Plissken in Escape from New York (1981) 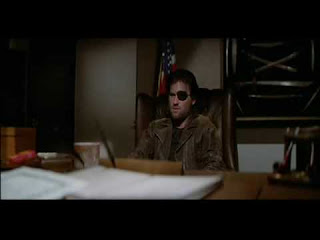 Escape From New York (1981) is not my favorite John Carpenter film.The Thing (1982),  Prince of Darkness (1987), They Live (1988), and In the Mouth of Madness (1995) are to me superior in their characterizations, mis en scene, and ellipses.But the scene between top U.S. cop Bob Hauk (Lee Van Cleef) and prisoner Snake Plissken (Kurt Russell) is a tour de force of rhetoric and economical exposition.It tells us everything we need to know about these two beset men, and about the story we are going to watch.It's well-captured in the Mike McQuay novelization:

….“Take off the leg irons,” the man behind the desk said.

The Sergeant knotted up his eyebrows, but did as he was told, Plissken smiled with the unexpected good fortune. He immediately went over and sat down in a chair, crossing his legs.

The man behind the desk nearly smiled. He nodded to the guards. “All right,” he said.

The Sergeant took a waddling step toward the desk. “He’s dangerous, sir.”

“I know,” the man returned, and reached down to pull a pearl-handled revolver out of its resting place. He cocked it. “I’ll be all right.”

The Sergeant shrugged and motioned his people out of the room. He followed them, closing the door behind him. Plissken looked at the closed door for a minute. This was the best shot he’d ever had, one on one with an old softy. He turned to the man, smiling broadly. He held up his chained hands.

The man shook his head, his face without expression. “I’m not a fool, Plissken,” he said. “Maybe we’d better get that out of the way first.”

The man set his lips. Plissken could see that there was something definitely bothering him. He set the gun down carefully on the desk top, then he reached into the top drawer and pulled out a beige folder. He opened it and read:

“Plissken. American. Lieutenant in Special Forces Unit: ‘Black Light.’ Two Purple Hearts in Leningrad and Siberia. Youngest man to be decorated by the President.” His eyes came up for just a second to touch Plissken’s, then he continued. “You robbed the Federal Reserve Depository. Life sentence in New York Maximum Security Penitentiary.” He looked up from the folder again, raising his eyebrows. “I’m ready to kick your ass out of the world, war hero.”

Plissken narrowed his gaze. There was something different about this man, something he couldn’t put his finger on. He wasn’t like the others. “Who are you?” he asked.

Plissken remembered. Hauk commanded the air cover at Leningrad. He had lost a lot of men, too. But, look at who was on what side of the desk. “You stuck with it, then. Didn’t you . . . blackbelly?”

Hauk’s voice came back angry. “You don’t know a thing about it.”

There was dead air between them, an absolute wall.

“Why are we talking?” Plissken said at last.

“I have a deal for you,” Hauk said, his voice cold and businesslike. “You’ll receive a full pardon for every criminal action you committed in the United States.”

Going into the folder, Hauk pulled out a piece of paper and held it up. Plissken had never seen a pardon before, but that sure looked like one. He stared at Hauk, not trusting him, not willing to trust anyone who had lived through Leningrad without being changed by it.

Hauk got up and moved around the desk. Plissken was surprised by how dirty the man was. He moved up closer to the Snake, almost close enough to reach out and grab.

“There was an accident about an hour ago,” Hauk said. “A small jet went down inside New York City. The President was on board.”

“President of what?” Plissken asked, ready to jump on Hauk if the opportunity presented itself.

“It isn’t funny, Plissken. You go in, find the President, bring him out in twenty-four hours, and you’re a free man.”

Plissken watched Hauk carefully, waiting for the punch line. It didn’t seem to be coming. “This a joke?” he finally asked.

Plissken sat back. He wasn’t anybody’s sucker bait. “I’ll think about it,” he answered.

Hauk took a breath, but his expression remained deadly earnest. “No time,” he said. “Give me an answer.” 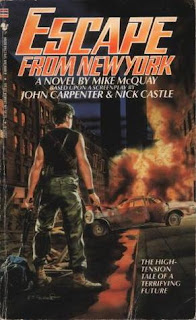 Posted by Jay Rothermel at 2:27 PM

Email ThisBlogThis!Share to TwitterShare to FacebookShare to Pinterest
Labels: movie