The enemy within: The Spear by James Herbert (1978)

....He was aware that the screaming had reached fever pitch, and the air was being violently disturbed by the frenzied, unseen things. He was aware that he was going to die by the hand of this unclean, drooling demon who bore the features of a man the world had despised. And he was aware there was nothing he could do to save himself.

In the last four decades I have purchased my share of second-hand James Herbert paperbacks. The challenge was always getting far enough into the narrative so that I would not give up on it. When it comes to novels, I am mostly a big giver-up. Short stories and non-fiction are more my meat.

This week, after a month of E.F. Benson, M.R. James, and other claasics, I decided I wanted to read some UK strange/weird/horror writers from the 1970s and 1980s.

(Benson and James wrote just at and after the peak of London's imperialist power. By the 70s and 80s, that power was over, and the capitalist ruling class in the UK were moving to break the the independence and militancy of the British labor movement and the Irish liberation struggle.)

I began with Guy N. Smith, and read his 1976 novel Night of the Crabs. Not so good: Smith seemed too bored to turn in more than a perfunctory performance. Which is too bad. When you're writing a novel about a giant crab invasion, half-measures will not suffice.

Then I started The Spear (1978) by James Herbert. Harry Steadman is the protagonist: former British Army intelligence, former contractor for Mossad, now a partner in a London private detective agency, and very successful. When some former Mossad acquaintances ask him to track down an old colleague, he refuses.

....He knew the disgust for himself would come later, would torment with the knowledge that he was little better than the men he had acted against. For the moment, though, those feelings would be held in abeyance – there was so much more to do.

Like Sam Spade, when Steadman's partner is killed, he has to something. It's all bound up with the Mossad job he turned down. In the first fifty pages, someone is crucified alive on Steadman's doorstep, and he and a woman journalist are chased through woods by a Centurion tank.

At which point I was ready to delete the book from my Google app and move on. Happily, I did not. After another chapter or two the plot got a little flesh to it, and the author, unlike Guy N. Smith, did not sleepwalk in its execution.

The spear is Herbert's MacGuffin. The Mossad wants it, because it is the totem of a secret cabal of Fourth Reichists on the verge of taking over the British government.

(There were a lot of these kinds of Nazi-rebirth thrillers in the 70s. Perhaps since the Big Four of World War Two by then stood revealed as enemies of humanity, popular fiction needed to try prettying them up by comparing them to Satanic fascists again.)

Chapter 12 of The Spear is a writing textbook: it features a knock-down drag-out fight between Steadman and some very dangerous minions of his nemesis. This type of scene is hard to do well, because many writers skimp when it comes to describing the exhausting and frustrating nature of close physical grappling. In TV and movies there is always a decision within seconds. David Morrell is the supreme artist of scenes like this, but James Herbert acquits himself very well.

The novel's climax, a really nightmarish confrontation in an underground labyrinth, is the novel's high point. Leading up to that battle, this scene shows off James Herbert's strengths very well:

....Steadman closed his eyes and rested his head against the cold floor for a brief moment, wanting to stay there, to sleep and so take himself away from the malevolent force in the chamber. He resisted, knowing to succumb would mean his death. Forcing his eyes open again, he saw the slumped form of the hermaphrodite, her tortured face mercifully turned away from him. He twisted his head, not wanting to look at the miscreation, and his eyes fell on something far worse. He faced the husk sitting in the high-backed chair.

The rotted corpse wore the faded uniform of the Nazi Schutzstaffeln: the brown shirt and black tie, the tunic with three silver-thread leaves enclosed in an oak-leaf wreath on each lapel, the sword-belt with ceremonial dagger attached, the cross-belt passed beneath silver braiding on the right shoulder, the swastika armband on the sleeve, the breeches tucked into long jackboots. On its head was the silver-braided cap with the Death’s Head emblem at its centre. The whole uniform was covered in a fine layer of dust and hung loosely over the still form, as if the body had shrivelled within it.

It sat upright as though locked in position, and Steadman’s horrified gaze travelled up from the jackboots, across the body, to the shrunken head that stared sightlessly across the dark chamber. The flesh on its face was stretched taut, greyish cheekbones showing through clearly, huge, festering rents in the skin alive with tiny, white moving shapes. The yellow skin at the throat sagged over the shirt collar, a shrivelled sack resembling a balloon that had been punctured. The lower lip had been eaten away revealing an uneven row of teeth stumps, and white, wispy hair clung sparsely to the upper lip. The face appeared chinless, as though the jawbone had receded back into the throat. One ear was missing completely, while all that remained of the other was a remnant of twisted, dried flesh. Thin strands of white hair hung from beneath the cap, whose peak fell low over the forehead, several sizes too big.

Peculiarly, pince-nez glasses were stuck firmly against the bridge of the nose as though permanently glued there, and one eye had escaped from its retaining socket and pressed against a lens. The tip of the nose was missing but the rest, although wrinkled and pitted, was intact. As Steadman watched, something black crawled from a nostril and scurried down the lower lip into the gaping mouth, disappearing from sight.

The investigator’s stomach heaved and he could no longer control the bile that rose in his throat. It poured from him in pain-wracking convulsions, steam rising in the deeply cold air. He pushed himself away, away from his own sickness and away from the vile, stinking creature they had kept embalmed in the underground crypt.

He knew, without any doubt, whose mummified body it was: the Gestapo uniform, the pince-nez, the remnants of a moustache – their Reichsführer, Heinrich Himmler. The stupid, demented bastards had kept his body all these years!

He shook with the horror of it. They had continued to worship not just his memory, but his physical body as well, hiding it here, a corrupted husk of dried flesh, an abomination which they could idolize as though he were still there to lead them!

He looked at the skeletal hands resting on the cadaver’s lap, withered and yellow, conscious that they had written the orders which had sent millions to their deaths: the hands of a clerk, the hands of a murderous butcher. And as he looked at them, the fingers began to move.

‘Oh, sweet Jesus,’ he said as the head slowly swivelled round to look down at him. 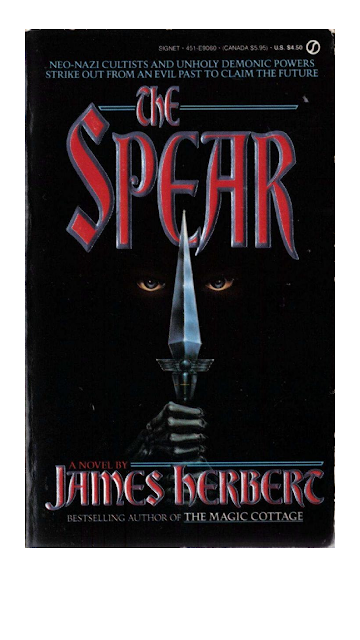 Posted by Jay Rothermel at 9:42 AM