The Devil's shelfie, probably: The Book by Margaret Irwin

Margaret Irwin's sublime 1930 short story "The Book" can be found here and here.

I first saw the story referenced in The Penguin encyclopedia of horror and the supernatural, edited by the masterful Jack Sullivan.

"The Book" begins as a tale about the perils of rereading favorite novels.

Mr. Corbett, hunting a book that will send him to sleep, raids his dining room's bookshelf:

....He hurriedly chose a Dickens from the second shelf as appropriate to a London fog, and had returned to the foot of the stairs when he decided that his reading tonight should by contrast be of blue Italian skies and white statues, in beautiful rhythmic sentences. He went back for a Walter Pater.

He found Marius the Epicurean tipped sideways across the gap left by his withdrawal of The Old Curiosity Shop . It was a very wide gap to have been left by a single volume, for the books on that shelf had been closely wedged together. He put the Dickens back into it and saw that there was still space for a large book. He said to himself in careful and precise words: “This is nonsense. No one can possibly have gone into the dining-room and removed a book while I was crossing the hall. There must have been a gap before in the second shelf.” But another part of his mind kept saying in a hurried, tumbled torrent: “There was no gap in the second shelf. There was no gap in the second shelf.”

He snatched at both the Marius and The Old Curiosity Shop , and went to his room in a haste that was unnecessary and absurd, since even if he believed in ghosts, which he did not, no one had the smallest reason for suspecting any in the modern Kensington house wherein he and his family had lived for the last fifteen years. Reading was the best thing to calm the nerves, and Dickens a pleasant, wholesome and robust author.

Tonight, however, Dickens struck him in a different light. Beneath the author’s sentimental pity for the weak and helpless, he could discern a revolting pleasure in cruelty and suffering, while the grotesque figures of the people in Cruikshank’s illustrations revealed too clearly the hideous distortions of their souls. What had seemed humorous now appeared diabolic, and in disgust at these two favourites he turned to Walter Pater for the repose and dignity of a classic spirit.

But presently he wondered if this spirit were not in itself of a marble quality, frigid and lifeless, contrary to the purpose of nature. “I have often thought,” he said to himself, “that there is something evil in the austere worship of beauty for its own sake.” He had never thought so before, but he liked to think that this impulse of fancy was the result of mature consideration, and with this satisfaction he composed himself for sleep.

Mr.Corbett's experience might be summed-up with the phrase We never read the same book twice. He thinks he has developed new intellectual acumen. He tells himself there is nothing odd about the dining room bookshelf, that "The things that disturb us at midnight are negligible at 9 a.m."

....Every new book seemed to him weak, tasteless and insipid; while his old and familiar books were depressing or even, in some obscure way, disgusting. Authors must all be filthy-minded; they probably wrote what they dared not express in their lives. Stevenson had said that literature was a morbid secretion; he read Stevenson again to discover his peculiar morbidity, and detected in his essays a self-pity masquerading as courage, and in Treasure Island an invalid’s sickly attraction to brutality.

This gave him a zest to find out what he disliked so much, and his taste for reading revived as he explored with relish the hidden infirmities of minds that had been valued by fools as great and noble. He saw Jane Austen and Charlotte Brontë as two unpleasant examples of spinsterhood; the one as a prying, sub-acid busybody in everyone else’s flirtations, the other as a raving, craving maenad seeking self-immolation on the altar of her frustrated passions. He compared Wordsworth’s love of nature to the monstrous egoism of an ancient bell-wether, isolated from the flock.

Is it the books that have grown corrupted, or their reader?

Mr. Corbett realizes it is not just favorite old books that have become distasteful.

....He discovered also and with a slight shock that Mrs. Corbett had always bored him. Dicky he began actively to dislike as an impudent blockhead, and the two girls were as insipidly alike as white mice; it was a relief when he abolished their

tiresome habit of coming in to say good night.

Instead of lighting-out for Tahiti to paint colorful nudes, as any other dissatisfied underachieving family man might, Mr. Corbett picks another book. The Last book he will ever need.

His choice recalls the wrong turns of inquisitive scholars in M.R. James stories or the fates of Ramsey Campbell's hopelessly distracted and oblivious protagonists.

....In the now unbroken silence and seclusion of the dining-room he read with feverish haste as though he were seeking for some clue to knowledge, some secret key to existence which would quicken and inflame it, transform it from its present dull torpor to a life worthy of him and his powers.

He even explored the few decaying remains of his uncle’s theological library. Bored and baffled, he yet persisted, and had the occasional relief of an ugly woodcut of Adam and Eve with figures like bolsters and hair like dahlias, or a map of the Cosmos with Hell-mouth in the corner, belching forth demons. One of these books had diagrams and symbols in the margin which he took to be mathematical formulas of a kind he did not know. He presently discovered that they were drawn, not printed, and that the book was in manuscript, in a very neat, crabbed black writing that resembled black-letter printing. It was, moreover, in Latin, a fact that gave Mr. Corbett a shock of unreasoning disappointment. For while examining the signs in the margin he had been filled with an extraordinary exultation, as though he knew himself to be on the edge of a discovery that should alter his whole life. But he had forgotten his Latin.

With a secret and guilty air which would have looked absurd to anyone who knew his harmless purpose he stole to the schoolroom for Dicky’s Latin dictionary and grammar, and hurried back to the dining-room, where he tried to discover what the book was about with an anxious industry that surprised himself. There was no name to it, nor of the author. Several blank pages had been left at the end, and the writing ended at the bottom of a page, with no flourish or subscription, as though the book had been left unfinished. From what sentences he could translate, it seemed to be a work on theology rather than mathematics. There were constant references to the Master, to His wishes and injunctions, which appeared to be of a complicated kind. Mr. Corbett began by skipping these as mere accounts of ceremonial, but a word caught his eye as one unlikely to occur in such an account. He read this passage attentively, looking up each word in the dictionary, and could hardly believe the result of his translation. “Clearly,” he decided, “this book must be by some early missionary, and the passage I have just read the account of some horrible rite practised by a savage tribe of devil-worshippers.” Though he called it “horrible”, he reflected on it, committing each detail to memory. He then amused himself by copying the signs in the margin near it and trying to discover their significance. But a sensation of sickly cold came over him, his head swam, and he could hardly see the figures before his eyes. He suspected a sudden attack of influenza, and went to ask his wife for medicine....

When he reaches his family in the drawing room, they ask him why he has a red fingerprint on his forehead. And that is only the prelude.

I've been fortunate lately in picking some excellent stories to read, and I cannot recommend Margaret Irwin's "The Book" strongly enough. 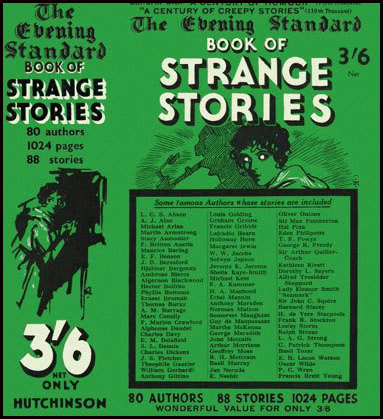 Posted by Jay Rothermel at 9:57 AM