13 on Saturday: A roundup of stories read

Brief notes or underlinings from some short stories read today.

Something Had to be Done by David Drake 1975

A wonderfully telescoped vampire story of the Vietnam War era.

McGonagall In The Head by Ramsey Campbell 1992

A tyro reporter on a newspaper takes obituary dictation over the phone. Soon he can't forget the ryhmes callers use: a word virus infection sends him over the edge.

A man remembers his childhood in an isolated Essex farming community, and relates the bloody folk rituals used to end a drought.

A slight change in climate ends modern civilization and sends humanity into a new dark age.

In the "strange story" tradition of Robert Aickman and Ramsey Campbell, Metcalfe gives us not a tale about a man descending into madness, but a story conveying to the reader what that descent feels like. Confusing, vertiginous, and shattering.

Widdershins: A Droll by Arthur Quiller-Couch 1895

The Last Seance by Agatha Christie 1926

....One sits in the cabinet in the darkness, waiting, and the darkness is terrible, Raoul, for it is the darkness of emptiness, of nothingness. Deliberately one gives oneself up to be lost in it. After that one knows nothing, one feels nothing, but at last there comes the slow, painful return, the awakening out ofsleep, but so tired–so terribly tired.’

‘Not nervous are you, Mother?’ said Mr Dinsmead. ‘It’s a wild night, that’s all. Don’t you worry, we’re safe here by our fireside, and not a soul from outside likely to disturb us. Why, it would be a miracle if anyone did. And miracles don’t happen. No,’ he added as though to himself, with a kind of peculiar satisfaction. ‘Miracles don’t happen.’

As the words left his lips there came a sudden knocking at the door. Mr Dinsmead stayed as though petrified....

The Hound of Death by Agatha Christie 1933

‘M. le docteur, I do not understand. Why should I have these dreams–these fancies? I was only sixteen when I entered the religious life. I have never travelled. Yet I dream of cities, of strange people, of strange customs. Why?’ She pressed both hands to her head.

The Bad Lands by John Metcalfe 1920

He held forth with peculiar vehemence and with appropriate gestures. He spoke of a new kind of terre-mauvaise, of strange regions, connected, indeed, with definite geographical limits upon the earth, yet somehow apart them and beyond them. ‘The relation,’ he said, ‘is rather one of parallelism and correspondence than of actual connection. I honestly believe that these regions do exist, and are quite as “real” in their way as the ordinary world we know. We might say they consist in a special and separated set of stimuli to which only certain minds in certain conditions are able to respond. Such a district seems to be superimposed upon the country to the south-west of this place.’

Island of Fear by Wlliam Sambrot 1958

Kyle stood on the warm sand, with the gull cries, the restless Aegean sea sounds all about him, and he knew at last who the old ones were who'd built the wall; why they'd built it to lead into the living waters and whom— what —the walls were meant to contain.

Creature of the Snows by William Sambrot 1960

"You're asking me to climb Mount Everest," Ed said carefully, keeping the sarcasm out of his voice, "to search for this plateau here," he tapped the shoddy photograph, "and take pix of—what are they—biped, erect-walking creatures, you say?"

Just as my father applied his eye to the keyhole, the Troll opened its mouth and bit off her head. Then, holding the neck between the bright blue lips, he sucked the bare meat dry. She shriveled, like a squeezed orange, and her heels kicked. The creature had a look of thoughtful ecstasy. When the girl seemed to have lost succulence as an orange she was lifted into the air. She vanished in two bites. The Troll remained leaning against the wall, munching patiently and casting its eyes about it with a vague benevolence. Then it leaned forward from the low hips, like a jackknife folding in half, and opened its mouth to lick the blood up from the carpet. The mouth was incandescent inside, like a gas fire, and the

blood evaporated before its tongue, like dust before a vacuum cleaner. It straightened itself, the arms dangling before it in patient uselessness, and fixed its eyes upon the keyhole. "

My father crawled back to bed, like a hunted fox after fifteen miles.... 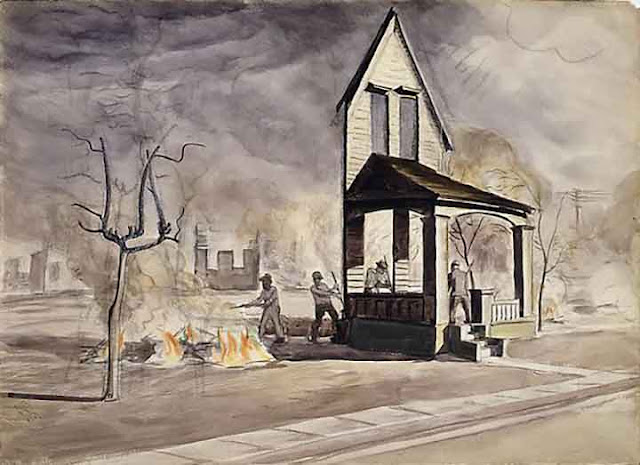 Posted by Jay Rothermel at 3:05 PM