With water filling your mouth, and looking up to the little patch of sky above: The Well by W.W. Jacobs

Amazing the number of wells in supernatural fiction.  "A School Story," "Wailing Well," and "Treasure of Abbott Thomas" by M.R. James are certainly the strongest. Wells are secret places, deep and dark, the product of highly skilled human labor.

W.W. Jacobs' 1902 collection The Lady of the Barge contains his story "The Well." It is a crime story in which the supernatural is only hinted-at suggestively, and the effect is all the more powerful in consequence.

The protagonist Jem has murdered his blackmailer and dumped the body down a disused well on his estate. Naturally his unsuspecting fiancee Olive is determined to visit the spot, and the dreamlike inevitabily of coming doom for Jem begins to gather speed.

....The well, which had long ago fallen into disuse, was almost hidden by the thick tangle of undergrowth which ran riot at that corner of the old park. It was partly covered by the shrunken half of a lid, above which a rusty windlass creaked in company with the music of the pines when the wind blew strongly. The full light of the sun never reached it, and the ground surrounding it was moist and green when other parts of the park were gaping with the heat.

Two people walking slowly round the park in the fragrant stillness of a summer evening strayed in the direction of the well.

"No use going through this wilderness, Olive," said Benson, pausing on the outskirts of the pines and eyeing with some disfavour the gloom beyond.

"Best part of the park," said the girl briskly; "you know it's my favourite spot."

"I know you're very fond of sitting on the coping," said the man slowly, "and I wish you wouldn't. One day you will lean back too far and fall in."

"And make the acquaintance of Truth," said Olive lightly. "Come along."

She ran from him and was lost in the shadow of the pines, the bracken crackling beneath her feet as she ran. Her companion followed slowly, and emerging from the gloom saw her poised daintily on the edge of the well with her feet hidden in the rank grass and nettles which surrounded it. She motioned her companion to take a seat by her side, and smiled softly as she felt a strong arm passed about her waist.

"I like this place," said she, breaking a long silence, "it is so dismal —so uncanny. Do you know I wouldn't dare to sit here alone, Jem. I should imagine that all sorts of dreadful things were hidden behind the bushes and trees, waiting to spring out on me. Ugh!"

"You'd better let me take you in," said her companion tenderly; "the well isn't always wholesome, especially in the hot weather.

The girl gave an obstinate little shake, and settled herself more securely on her seat.

"Smoke your cigar in peace," she said quietly. "I am settled here for a quiet talk. Has anything been heard of Wilfred yet?"

"Quite a dramatic disappearance, isn't it?" she continued. "Another scrape, I suppose, and another letter for you in the same old strain; 'Dear Jem, help me out.'"

Jem Benson blew a cloud of fragrant smoke into the air, and holding his cigar between his teeth brushed away the ash from his coat sleeves.

"I wonder what he would have done without you," said the girl, pressing his arm affectionately. "Gone under long ago, I suppose. When we are married, Jem, I shall presume upon the relationship to lecture him. He is very wild, but he has his good points, poor fellow."

"He is nobody's enemy but his own," said the girl, startled by this outburst.

"You don't know much about him," said the other, sharply. "He was not above blackmail; not above ruining the life of a friend to do himself a benefit. A loafer, a cur, and a liar!"

The girl looked up at him soberly but timidly and took his arm without a word, and they both sat silent while evening deepened into night and the beams of the moon, filtering through the branches, surrounded them with a silver network. Her head sank upon his shoulder, till suddenly with a sharp cry she sprang to her feet.

"What was that?" she cried breathlessly.

"What was what?" demanded Benson, springing up and clutching her fast by the arm.

She caught her breath and tried to laugh.

"What is the matter?" he asked gently.

"What was it startled you?"

"I was startled," she said, slowly, putting her hands on his shoulder. "I suppose the words I used just now are ringing in my ears, but I fancied that somebody behind us whispered 'Jem, help me out.'"

"Fancy," repeated Benson, and his voice shook; "but these fancies are not good for you. You—are frightened—at the dark and the gloom of these trees. Let me take you back to the house."

"No, I'm not frightened," said the girl, reseating herself. "I should never be really frightened of anything when you were with me, Jem. I'm surprised at myself for being so silly."

The man made no reply but stood, a strong, dark figure, a yard or two from the well, as though waiting for her to join him.

"Come and sit down, sir," cried Olive, patting the brickwork with her small, white hand, "one would think that you did not like your company."

He obeyed slowly and took a seat by her side, drawing so hard at his cigar that the light of it shone upon his fare at every breath. He passed his arm, firm and rigid as steel, behind her, with his hand resting on the brickwork beyond.

"Are you warm enough?" he asked tenderly, as she made a little movement. "Pretty fair," she shivered; "one oughtn't to be cold at this time of the year, but there's a cold, damp air comes up from the well."

As she spoke a faint splash sounded from the depths below, and for the second time that evening, she sprang from the well with a little cry of dismay.

"What is it now?" he asked in a fearful voice. He stood by her side and gazed at the well, as though half expecting to see the cause of her alarm emerge from it.

"Oh, my bracelet," she cried in distress, "my poor mother's bracelet. I've dropped it down the well."

"The one that was my mother's," said Olive. "Oh, we can get it back surely. We must have the water drained off."

"Jem," said the girl in terrified tones, "dear Jem, what is the matter?"

For the man she loved was standing regarding her with horror. The moon which touched it was not responsible for all the whiteness of the distorted face, and she shrank back in fear to the edge of the well. He saw her fear and by a mighty effort regained his composure and took her hand.... 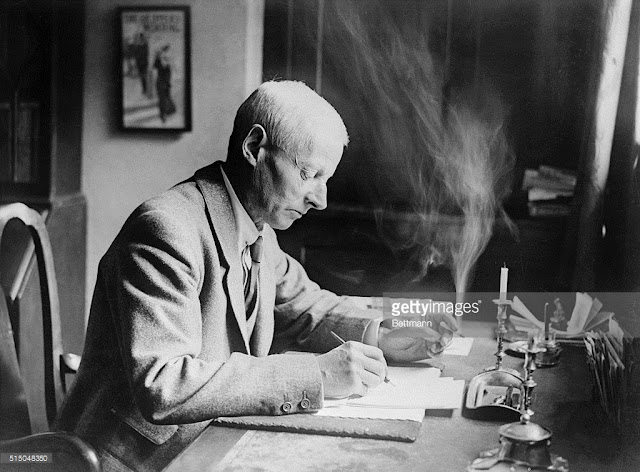 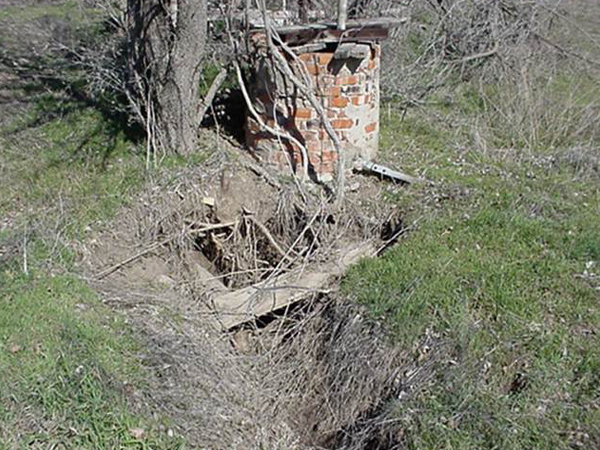 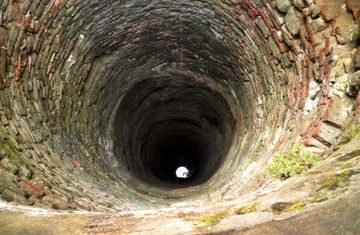 Posted by Jay Rothermel at 9:08 AM