The central section of the story takes place on April 30. Carfax has come to the Welsh valley of Cwm Garon for a walking vacation. A palpable sense of wrongness and animosity permeates the landscape.

These paragraphs are a wonderful distillation of rural, outdoorsy horror. 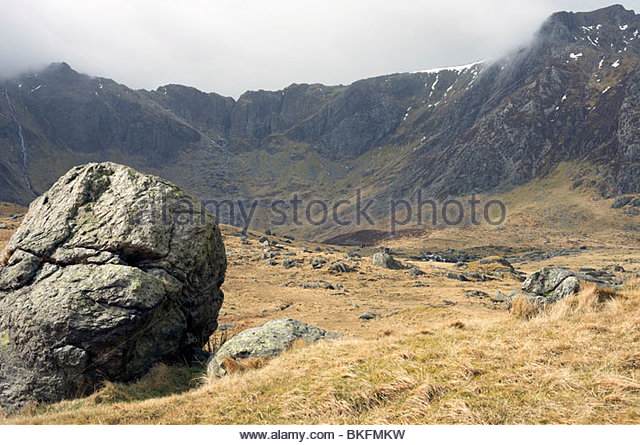 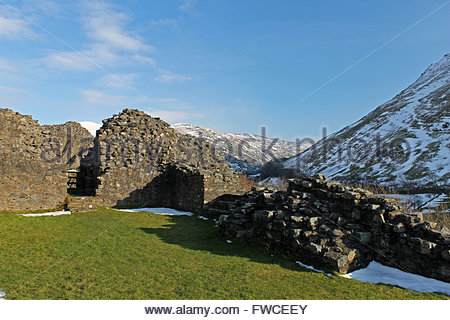 ….By the time he had reached the valley floor the previous night, darkness had prevented him from forming an adequate picture of his new surroundings, and now the weather conditions could scarcely have been less favourable. The portents of a stormy sunset and an ominously clear night had been fulfilled. The mountain walls upon either hand were hidden by a moving wrack of clouds whose tattered fringe had descended almost to the upper limit of the cultivated fields. A fine but deceptively penetrating rain was falling, and although occasional strong gusts of wind came eddying off the mountains, now from this direction, now from that, the air was humid and stifling. The swollen Garon and the innumerable small torrents cascading down the steep slopes filled the valley with the sound of falling water. Nevertheless, knowing how swiftly the mountain climate could change, Carfax was not unduly downcast and, buttoning up the collar of his mackintosh, he set off resolutely up the valley. The lane was narrow and high banked, and was never far away from the line of alder and hazel which overhung the shallow gorge through which the river flowed. He noticed that the small fields, both pasture and arable, looked clean and well tended, their hedges neatly laid and trimmed, but he saw no one at work in them. The small farms seemed equally deserted, and had he not scented wood-smoke as he passed them he would have thought that they were empty. No doubt the weather accounted for this suspension of activity. It struck him as ironical that the only fellow-mortal he encountered in the morning’s solitude he passed by unawares. Only a chance glance over his shoulder had revealed the figure of a man sheltering beneath a tree which he had lately passed. The man stood so still, and the old brown overcoat, together with the sack which he had thrown over head and shoulders against the wet, blended so exactly with the colour of the tree bole at his back, that Carfax stopped for a moment to confirm his first glance. The man ignored his scrutiny, but when, at the bend of the road, he looked back again, he was no longer to be seen.

He had been walking for the best part of an hour when he saw on the left of the road what he took to be the ruins of a church. The valley was narrower here, and its walls more precipitous, for the clouds revealed glimpses of naked crags and desolate screes of shattered boulders. As though these features had not already made the site of the church sombre enough, a dense belt of pine-trees had been planted beside it. This must be Capel Cwm Garon, he reflected, recalling his study of the map during breakfast. He thought he had never seen so gloomy a place, it would seem dark even in sunlight, and, as the ruined church appeared to be of no architectural merit, he walked on. He conjectured that he must be nearing the head of the valley, for the lane grew rougher and commenced to climb steeply until he presently gained the open mountain. The rain had stopped, the sky looked brighter ahead, while the clouds showed signs of lifting. The rain, the lowering clouds and the oppressive humid warmth of the valley had between them damped his spirits, but now he stepped out cheerfully, a cooler and drier wind in his face which made him feel as one who passes into fresh night air out of some overheated room.

By the time he had reached the head of the pass and could look down on the great landscape of hill and vale spread out beneath him, there was blue sky overhead, and a moving pattern of sunlight and shadow was dappling the slopes of the mountains. Carfax felt very well content as he sat with his back against a sheltering boulder and munched his sandwiches. Not far away a little group of mountain ponies were grazing, while high overhead a buzzard soared on moth-like wings. A shepherd was gathering his sheep off the north face of the mountain; Carfax could see his tiny foreshortened figure on the plateau far below, and his shrill whistle as he worked his dogs was borne up to him on the wind. These things brought a sense of life and companionship, dispelling the feeling of loneliness that had been growing upon him since he left the train on the previous day. He took out his map and checked his position. He had reached the central massif of the range. From it, the long ridges stretched southward like the fingers of an outspread hand. Between them, and to the west, lay two valleys, the Llan Fawr and the Llan Fechan, running parallel with Cwm Garon. As the weather seemed to have set fair, and there was plenty of time, he decided he would walk back down the Llan Fawr valley, cross the intervening ridge at a point well below Llangaron, and so return to the inn from the opposite direction.

He found that the valley of Llan Fawr was physically very similar to that of Cwm Garon. If anything, it was even narrower, while the mountain walls were equally high. Yet somehow the atmosphere of the place seemed quite different; ‘more friendly’ was the description which at once occurred to him. Obviously the improvement in the weather must be responsible, he decided; this mountain country was strangely temperamental. Owing to the more restricted area of cultivated land, the small farms were spaced farther apart than those in Cwm Garon, yet there seemed to be no lack of life and activity. A hedger at work beside the lane, and a swarthy individual leading a pair of jennets with pack-saddles, bid him a lilting good day as he passed. In one farmyard three small children paused from play to stare round-eyed as he went by, while in a nearby field, sown with oats, a farmer was working a two-horse roll. Finally, just before he turned off the road to climb back over the ridge, he met a woman driving three cows to the evening milking.

When he had finished the climb and begun the steep descent, the sun was still lighting the fields on the farther side of Cwm Garon, but he noticed that they looked just as deserted as they had done that morning. There still seemed to be neither sight nor sound of any activity. Silence seemed to well up from the valley like water from a spring, in fact the distant murmur of the Garon seemed to symbolise and accentuate it. He began to recall all the small workaday noises which he had heard but not remarked in Llan Fawr, and the lower he descended, the louder his footfalls seemed to sound. Despite the sunlight and the clear air he found the feeling of loneliness and of strange oppression inexplicably returning. There was a sense of menacing constriction about the towering walls which hemmed in this valley and cut him off from the outer world, and yet, after his experience in Llan Fawr, he knew that it could not merely be a case of claustrophobia.

He had not gone far along the road back to Llangaron when he came in sight of a small public-house, and decided that a glass of beer would help him over the last lap of the way. Probably, too, he would find company there which would dispel this curious illusion that the valley was deserted.

The dim, low-ceilinged room—there was no bar—was snug and spotless. The stone-flagged floor looked newly scrubbed, and the dark polished surfaces of table, settle and high-backed Welsh dresser caught the light of the cheerful fire which burned in the hob grate. But the room was empty and silent save for the small settling sounds of the fire and the measured ticking of the grandfather clock. Carfax coughed and scuffed his feet on the flags. A latch clicked in the back of the house, and as the unseen door opened he heard a deep rumble of male voices. A woman appeared, and when she had fetched his drink he made some trivial pleasantry, but she seemed either shy or taciturn, for she answered in monosyllables, and after standing awkwardly for a moment, retired again to what he imagined to be the kitchen. The indistinguishable murmur of male talk went on. Carfax took a deep and gratifying draught, and then stooped to knock out his pipe in the ash-tray. As he did so, he realised that the dottle already in the tray was warm, and that the cigarette stub beside it was still smouldering. Looking round the room curiously, he then saw that a man’s cap lay in the chimney-corner of the settle, and that two knarled hazel sticks were propped against the wall near the door. At any other time and place, Carfax would not have observed such trivialities, and even if he had he would have attached no importance to them. But now they bred in him a disquieting suspicion which refused to be dispelled. It was that his approach had been discreetly observed by the late occupants of the room, and that for reasons best known to themselves they had retreated to the kitchen. The uncomfortable feeling of unwelcome intrusion which this suspicion prompted scarcely encouraged him to linger. The room seemed to have grown suddenly hostile, so much so that he did not even pause to refill his pipe, but drained his glass and set out once more upon his way.

The sunlight had now crept away from the fields, so that although the higher slopes of the eastern ridge were still suffused with golden light, the shadows in the valley were already thickening into twilight. His experience at the inn had exerted a curious influence over his mind, he discovered, for although the farms he passed seemed as still and deserted as those he had seen that morning, they no longer gave him the impression of being uninhabited. On the contrary, he imagined that every window concealed a watcher, that every house was the centre of some intense and secret life which, at his approach, was instantly suspended. The farther he went the more certain did he become that his every movement was the subject of furtive scrutiny, yet it was a certainty which his reason was powerless either to confirm or to disprove. Time and again he would stop and look back quickly, hoping to surprise the swaying of a curtain, the movement of a door, or to see in the shadows of tree or hedge some tangible shape. He looked in vain. Yet the feeling and the fear continued to grow upon him....

Posted by Jay Rothermel at 4:32 AM