That very day: Randalls Round by Eleanor Scott

Randall Round is a 1929 collection by Eleanor Scott. In her prefatory note she says the stories were all suggested by dreams.

The short story "Randalls Round" certainly has that dreamlike quality of biting and arbitrary distancing. It begins in the Jamesian manner with Heyling dismissing his friend Mortlake's interest in the actual material forces of folk customs. (Heyling will learn better.)

Then Heyling is off to a weekend's rest a Cotswolds inn called The Flaming Hand.

(In passing, we are informed the date is October 31.)

....Heyling received a hearty welcome at the inn. Visitors were not very frequent at that time of year, for Randalls is rather far from the good hunting country. Even a chance weekender was something of an event. Heyling was given a quite exceptionally nice room (or rather, a pair of rooms – for two communicated with one another) on the ground floor. The front one, looking out on to the old square, was furnished as a sitting–room; the other gave onto the inn yard, a pleasant cobbled place surrounded by a moss–grown wall and barns with beautiful lichened roofs. Heyling began to feel quite cheerful and vigorous as he lit his pipe and prepared to spend a lazy evening.

As he was settling down in his chair with one of the inn’s scanty supply of very dull novels, he was mildly surprised to hear children’s voices chanting outside. He reflected that Guy Fawkes’ Day was not due yet, and that in any case the tune they sang was not the formless huddle usually produced on that august occasion. This was a real melody – rather an odd, plaintive air, ending with an abrupt drop that pleased his ear. Little as he knew folk–lore, and much as he despised it, Heyling could not but recognise that this was a genuine folk air, and a very attractive one.

The children did not appear to be begging; their song finished, they simply went away; but Heyling was surprised when some minutes later he heard the same air played again, this time on a flute or flageolet. There came also the sound of many feet in the market square. It was evident that the whole population had turned out to see some sight. Mildly interested, Heyling rose and lounged across to the bay window of his room.

The tiny square was thronged with villagers, all gazing at an empty space left in the centre. At one end of this space stood a man playing on a long and curiously sweet pipe: he played the same haunting plaintive melody again and again. In the very centre stood a pole, as a maypole stands in some villages; but instead of garlands and ribbons, this pole had flung over it the shaggy hide of some creature like an ox. Heyling could just see the blunt heavy head with its short thick horns. Then, without a word or a signal, men came out from among the watchers and began a curious dance.

Heyling had seen folk–dancing done in Oxford, and he recognised some of the features of the dance; but it struck him as being a graver, more barbaric affair than the performances he had seen before. It was almost solemn.

As he watched, the dancers began a figure that he recognised. They took hands in a ring, facing outwards; then, with their hands lifted, they began to move slowly round, counter–clockwise. Memory stirred faintly, and two things came drifting into Heyling’s mind: one, the sound of Mortlake’s voice as the two men had stood watching a performance of the Headington Mummers – “That’s the Back Ring. It’s supposed to be symbolic of death – a survival of a time when a dead victim lay in the middle and the dancers turned away from him.” The other memory was dimmer, for he could not remember who had told him that to move in a circle counter–clockwise was unlucky. It must have been a Scot, though, for he remembered the word “widdershins.”

These faint stirrings of memory were snapped off by a sudden movement in the dance going on outside. Two new figures advanced – one a man, whose head was covered by a mask made in the rough likeness of a bull; the other shrouded from head to foot in a white sheet, so that even the sex was indistinguishable. Without a sound these two came into the space left in the centre of the dance. The bull–headed man placed the second figure with its back to the pole where hung the hide. The dancers moved more and more slowly. Evidently some crisis of the dance was coming.

Suddenly the bull–headed man jerked the pole so that the shaggy hide fell outspread on the shrouded figure standing before it. It gave a horrid impression – as if the creature hanging limp on the pole had suddenly come to life, and with one swift, terrible movement had engulfed and devoured the helpless victim standing passively before it.

Heyling felt quite shocked – startled, as if he ought to do something. He even threw the window open, as though he meant to spring out and stop the horrid rite. Then he drew back, laughing a little at his own folly. The dance had come to an end: the bull– headed man had lifted the hide from the shrouded figure and thrown it carelessly over his shoulder. The flute–player had stopped his melody, and the crowd was melting away.

“What a queer performance!” said Heyling to himself. “I see now what old Mortlake means. It does look like a survival of some sort. Where’s that book of his?“

He rummaged in his rucksack and produced a book that Mortlake had lent him – one volume of a very famous book on folk–lore. There were many accounts of village games and “feasts”, all traced in a sober and scholarly fashion to some barbaric, primitive rite. He was interested to see how often mention was made of animal masks, or of the hides or tails of animals being worn by performers in these odd revels. There was nothing fantastic or strained in these accounts – nothing of the romantic type that Heyling scornfully dubbed “aesthetic.” They were as careful and well authenticated as the facts in a scientific treatise. Randalls was mentioned, and the dance described – rather scantily, Heyling thought, until, reading on, he found that the author acknowledged that he had not himself seen it, but was indebted to a friend for the account of it. But Heyling found something that interested him.

“The origin of this dance,” he read, “is almost certainly sacrificial. Near Randalls is one of those ’banks’ or mounds, surrounded by a thicket, which the villagers refuse to approach. These mounds are not uncommon in the Cotswolds, though few seem to be regarded with quite as much awe as Randalls Bank, which the country people avoid scrupulously. The bank is oval in shape, and is almost certainly formed by a long barrow of the Paleolithic age. This theory is borne out by the fact that at one time the curious Randalls Round was danced about the mound, the ’victim’ being led into the fringe of the thicket that surrounds it.” (A footnote added, “Whether this is still the case I cannot be certain.”) “Permission to open the tumulus has always been most firmly refused.” 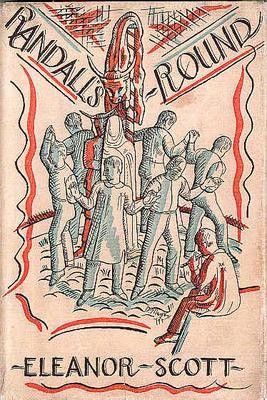 Posted by Jay Rothermel at 8:34 AM