Every third night: The Fiend of the Cooperage by Conan Doyle

Today is Conan Doyle's 158th birthday. "The Fiend of the Cooperage" (1897) has always been a favorite of mine.

....He led the way into a long building with an immense quantity of barrel staves and iron hoops littered about in it.

“This is our cooperage,” said he. “We have the staves sent out in bundles, and we put them together ourselves. Now, you don’t see anything particularly sinister about this building, do you?”

I looked round at the high corrugated iron roof, the white wooden walls, and the earthen floor. In one corner lay a mattress and a blanket.

“I see nothing very alarming,” said I.

“And yet there’s something out of the common, too,” he remarked. “You see that bed? Well, I intend to sleep there to-night. I don’t want to buck, but I think it’s a bit of a test for nerve.”

“Oh, there have been some funny goings on. You were talking about the monotony of our lives, but I assure you that they are sometimes quite as exciting as we wish them to be. You’d better come back to the house now, for after sundown we begin to get the fever-fog up from the marshes. There, you can see it coming across the river.”

I looked and saw long tentacles of white vapour writhing out from among the thick green underwood and crawling at us over the broad swirling surface of the brown river. At the same time the air turned suddenly dank and cold.

“There’s the dinner gong,” said the Doctor. “If this matter interests you I’ll tell you about it afterwards.”

It did interest me very much, for there was something earnest and subdued in his manner as he stood in the empty cooperage, which appealed very forcibly to my imagination. He was a big, bluff, hearty man, this Doctor, and yet I had detected a curious expression in his eyes as he glanced about him—an expression which I would not describe as one of fear, but rather of a man who is alert and on his guard.

“By the way,” said I, as we returned to the house, “you have shown me the huts of a good many of your native assistants, but I have not seen any of the natives themselves.”

“They sleep in the hulk over yonder,” the Doctor answered, pointing over to one of the banks.

“Indeed. I should not have thought in that case that they would need the huts.”

“Oh, they used the huts until quite recently. We’ve put them on the hulk until they recover their confidence a little. They were all half mad with fright, so we let them go, and nobody sleeps on the island except Walker and myself.”

“What frightened them?” I asked.

“Well, that brings us back to the same story. I suppose Walker has no objection to your hearing all about it. I don’t know why we should make any secret about it, though it is certainly a pretty bad business.” 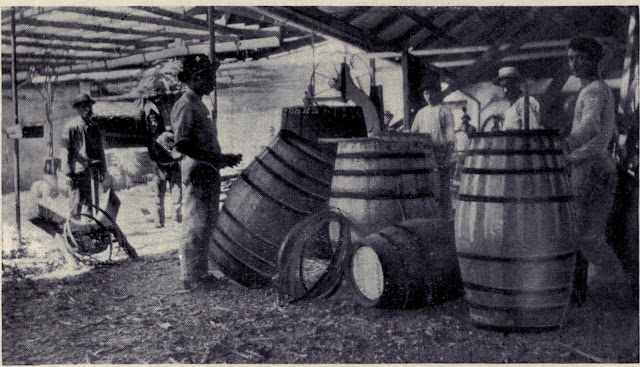